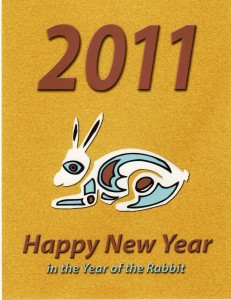 When we think of animals, we often don’t consider how much the culture we grew up in has shaped and shaded our perceptions of them.  Take rabbits, for example.  Ask a typical American for a quick response on what comes quickly to mind at the mention of the word rabbit, and chances are that Easter bunnies and/or a certain carrot-chomping cartoon character might be the first reflexive reactions. It’s hard to figure out what a person in, say, Bolivia might come up with in response to that question, or India, or anywhere else, without knowing the role that rabbits play (or don’t play at all) in that culture, especially during the formative years of childhood.
In China, where rabbits occupy one of the twelve “Year of the” branches, most people would think first of purity, good luck, peacefulness and of the shape of the rabbit, as viewed from the side.  So says Hu Renyi, known as Renyi, who is a local resident residing part of the year in Cold Spring and the other part in his native China, south of Shanghai. He also said that “Old Rabbit in the Moon” (also known as “Jade Rabbit”) would be a common response in China, as that is a fable known to most Chinese children.  The story is often told during the Moon Festival.  In the story of the Jade Rabbit, there were three sages who transformed themselves into pitiful old men and begged for something to eat from a fox, a monkey and a rabbit. The fox and the monkey both had food to give to the old men but the rabbit empty-handed, offered his own flesh instead. He jumped into the fire and cooked himself. The heavenly beings were so touched by the rabbit’s sacrifice that they let him live in the Moon Palace where he became the Jade Rabbit.
Renyi, the father of a pre-school age son, and therefore connected with many parents in this area, came to Haldane to talk to Jennifer Windels’ fourth-grade class about the Year of the Rabbit Chinese New Year, and about China in general.  Renyi, a painter and an instructor at the School of Visual Arts, also invited the students to participate in an exciting international project. Justin Zheng, a classmate of Renyi’s from his undergraduate days owns a “creative company” which promotes shows in Shanghai.  He was seeking artwork for a Spring Festival (as the New Year is known in China) exhibit of children’s art, entitled “Let’s Use Colors to Build A Friendship” to be sent to China as a blessing for the new year for China’s children. The 88 selected works are being displayed on the 88th floor of the Jin Mao Tower in Shanghai.
After learning about the techniques of Chinese painting, including brush strokes, the children, in cooperation with Haldane art teacher Jean Cendali, and using traditional American techniques of painting, created their visions of rabbits, and all of the artwork (along with artwork from the Bounous Montessori pre-school) was sent off to China, where several paintings were chosen for inclusion in the international exhibit.  This video clip from Shanghai television lingers over some of the artwork (wait until the camera starts to pan over the images of the art and keep your eyes peeled) including an image of a Miss America rabbit wearing a banner, fireworks in the background, painted by Grace Campanile.
Renyi made several visits to the classroom.  In the first, he “introduced myself as an artist, and spoke about the Chinese New Year, the culture and the food, for their curiosity.  What’s real Chinese food?  What New Year gifts are received?  In China, kids receive a red bag with money inside.  The kids like the gift of toys idea more.” Elaborating on this tradition, Renyi said, “Children in China visit all of their relatives at this time of year.  We call it 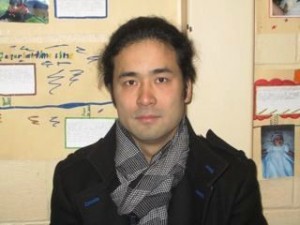 Hu Renyi during visit to Haldane

‘Bow’ New Year, as you visit family, do your duty, bow to your relatives, stay a little while and collect your red bag.”  In the past, when there was little money in China, there was not the ability to give lots of toys.  Things have changed, and the amount of money given has radically increased, but children are expected to use a portion of it to pay a part of their tuition at school.”
The children were fascinated by the lack of forks and knives, butter and cheese, and also by things like the one-child rule. A question and answer session attended by Philipstown.info included such hard-hitting topics as dumplings, sweet and sour chicken and noodles!  (It was rather close to lunch time).  When asked what they had learned about China, the same themes echoed: Adam and Ethan, Lydia and Katie overlapped each other with “the kind of food they eat and what types of things they use to draw.”  For their art projects, Ethan and Adam chose cartoon rabbits, while Lydia and Katie drew “American rabbits!”
It is Renyi’s observation that most American children drawing rabbits depict them from a front-angle view, and in a grey color, whereas in China, these rabbits would be white, and drawn from a side perspective. Renyi explained to Philipstown.info that the 12 animals involved in the designation of years also factor into a great many aspects of Chinese life, including medicines, “we divide medicines into these animal types.  A cow type doesn’t mean that it is consumed by a cow, but that it has the traits of a cow in the medicine.”
Mrs. Windels was happy to have her curriculum enhanced through Renyi’s visit. “My class was captivated by Renyi’s tales of Chinese New Year and the long history of China during his recent presentation.  They had so many questions for him!  The students were so excited to be asked to participate in the exhibition at the Shanghai Grand Hyatt. It is truly an honor to be asked to represent America.  The kids had an opportunity to learn and understand Chinese culture through this project, as well as to be international ambassadors in a sense.  We are eager to see the video of the exhibition that will be sent to us, and are looking forward to seeing the other artists’ works from around the globe that shared in this celebration of the Chinese New Year.”
What does the Year of the Rabbit promise to bring?  According to Renyi, the year should be “quiet, lovely.  Rabbits are peaceful and very patient.  We want to wish everyone a peaceful year.  Be nice to everyone.  Rabbits never complain.” Other artwork images may be found here.

Photos by A. Rooney
Artwork by Dale Leifeste