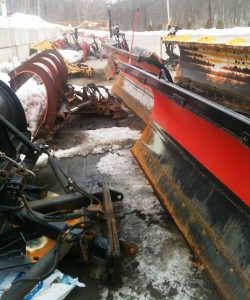 “Let it snow, let it snow, let it snow” may work well as a Christmas song but you might want to use caution if you plan on singing that tune around local government officials trying to cope with the additional cost of what has been the most severe winter in years. The Village of Cold Spring is a prime example of the big bite Mother Nature is taking out of local budgets. The village normally budgets about $12,000 to cover the cost of snow removal for an entire year. “This year we spent approximately $20,000 in January alone” said Mayor Seth Gallagher. Costs include staff overtime, equipment rental, hiring outside contractors and purchasing larger than normal amounts of sand and salt. Nelsonville Trustee Ande Merante said that while his municipality has fewer streets to keep clear it is experiencing a proportionately similar increase in costs. Nelsonville hires outside contractors for snow removal.
The Town of Philipstown is not faring any better. In January 2010, the first three highway department payrolls cost $18,439. The same period this year cost $61,439 due to several severe winter storms. In 2010 the town purchased approximately 700 tons of salt in January and early February. For roughly the same period this year it purchased almost 1500 tons. The amount of sand purchased also increased dramatically. Philipstown Highway Superintendent Roger Chirico said that the timing of winter storms has been a big factor in increasing the cost of clearing the town’s 70 miles of roads. “The problem this year was that the storms more or less came all at once. The salt and sand sheds had to be refilled constantly.” 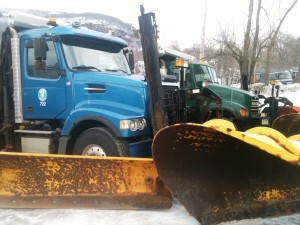 Putnam County faces the same challenge. Deputy Commissioner of Highways and Facilities Emma Kounine said that barely six weeks into the year the department has already spent 51 percent of funds allotted for overtime and 34 percent of its materials budget. County Legislator Vinny Tamagna echoed that, indicating that the county has spent more than one third of its $1,335,000 snow removal budget and half of the $610,000 allotment from the state. “Keep in mind that the finish line (for snowfall) is the end of March. He may have underestimated that “finish line” by at least one day. On April 1, 1997 Philipstown received 12 inches of snow. Tamagna added “We could still have a difficult November and December [considered by the county as part of the 2011 snow season.]”  Tamagna said that the county concentrates its snow plowing efforts on times when roads are busiest, especially when commuters are going to and from work. The county is responsible for plowing Route 301 through Nelsonville south to the Cold Spring traffic light. “Route 301 has been a huge problem for business parking” he said.
Bill Sohan owns Whistling Willies American Grill, located at the corner of Main Street (Rte 301) and Morris Ave (Rte 9D). He agrees with Tamagna that the winter has caused significant parking problems – – problems that hurt his business. When the county was slow to remove snow from the Main Street parking spaces in front of his restaurant, Sohan took matters into his own hands and paid a private snow removal service $300 to clear them. “The problem is that this week is the first time we’ve gotten a break (in the weather)” Tamagna said. County crews began hauling away the excess snow from that section of Main Street during the past week.
While winter is causing local officials and some businesses grief, others have benefitted. One store that has heard the cash register ring often is C&E Paints in Cold Spring. Sale of roof rakes, shovels, ice melt, ice choppers and sand has been more than brisk. “We’ve sold out – – sometimes more than once a week” said Ed Cretelli, one of the paint and hardware store’s owners. Asked if that meant he’s hoping for another winter like this one next year Cretelli laughed and said, “I don’t know about that!”