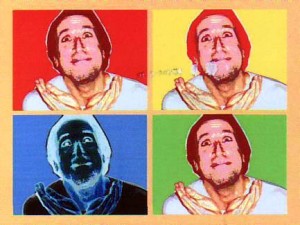 The Depot Theatre’s current production of Tartuffe gallops along as we learn of Orgon, his new savior and best friend, Tartuffe, and the potentially drastic changes that Tartuffe’s incorporation into the family will bring. The results are predictably dramatic – -and traumatic – – but the audience can rest easy in the knowledge that all will end well. Moliere’s original comedy of manners has been transported two centuries into the future: specifically the 1960s, aided by a new, colloquial translation by Roger McGough, and a mod set by Dana Kenn.
Taking place in one very frantic day, we learn that Orgon, a wealthy and prominent citizen, has decided to give up all his worldly possessions – – including his wife and his daughter, who has been promised to her one true love. The reason for this radical about-face is Tartuffe; a con artist posing as a religious ascetic who has insinuated himself into Orgon’s affections. While all members of the family see Tartuffe for what he really is, Orgon insists on seeing him, to borrow a phrase from the time, through rose colored glasses. It is not until the family is on the verge of eviction from their home that Orgon “sees the light.” It is only through the intercession of the king that Orgon’s possessions and community standing are returned to him and that Tartuffe is sent to his just rewards.
Suitably smarmy is Andre Herzegovich, who moves seamlessly between Tartuffe’s guises as a religious innocent and lecherous thief and con artist. His target, Orgon, is played by Joe Carlisle as a most straight-laced and uptight businessman. His wife Elmire, played by Nancy Larsen, seems a suburban housewife who cannot fathom what has come over her husband. Also in shock over the situation are Mme. Parnelle, his mother, played by Nancy Swann, who is also oblivious to Tartuffe’s chicanery; his brother-in-law, Cleante, played by Angus Hepburn; whose attempts to help only hinder; and his daughter Marianne, convincingly played by Hannah Friedman, who believes her life over without Valere, her love, played with swagger by Matt Rowe. Overseeing and commenting upon all the action is Dorine, the maid. Played by Zsuzsa Manna, the maid is part Greek chorus and part heckler and, in the show’s running joke, constantly refers to “Tar-tooth” only to be corrected by other members of the family.
Tartuffe continues its run Feb. 25 to March 6, Fridays and Saturdays at 8pm and Sundays at 2pm.  Tickets are $18 for adults and $15 for children and seniors, and are available by calling the box office at 845-424-3900 or visiting www.philipstowndepottheatre.org/

One thought on “"Tartuffe" Transposed to Swinging Sixties”