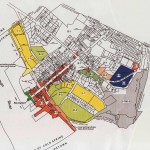 “So many communities have a ‘postage stamp’ for a waterfront. You’ve got a great property here. This is really unique.” That was one of Dan Miller’s main messages on Feb. 24 when he addressed the Special Board that is drafting Cold Spring’s Local Waterfront Revitalization Plan (LWRP). Miller is Estuary Habitat Restoration Coordinator with the Hudson River Estuary Program being carried out by the New York State Department of Environmental Conservation (DEC.) The Special Board is working to complete the LWRP in 2011, having completed its work on Cold Spring’s Comprehensive late last year. The board had originally intended to complete both documents simultaneously but had to discontinue work on the LWRP until State funding was reinstated.
Miller was invited to the meeting to review a number of key waterfront issues that the LWRP must address. “My job is to see how human interaction has affected the river – from Troy to the Battery – and try to provide technical advice, framing issues in terms of (wildlife) habitat to assist your decision making. What I am not is regulatory” Miller said.He also said that he helps ensure that actions taken in communities with an approved LWRP are consistent with that plan.
Before getting into the details of Cold Spring’s waterfront Miller provided an overview of the Hudson River, its significance as a resource and the major issues faced by communities from Troy to The Battery. “The Hudson is the only sea level crossing of the Appalachian Mountains” Miller said. He listed wildlife habitat, food production, transportation, recreation, and opportunities for community development as the river’s most significant contributions to life in the Hudson Valley. He also said that communities up and down the Hudson are experiencing similar trends including failure of old bulkheads, new development pressure, waterfront revitalization and debate over use of hard versus biologically engineered shorelines. “Erosion control is a priority in many communities because waterfront lands are so valuable” he said. 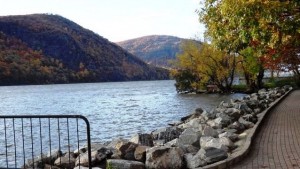 Miller explained that one of the options for shoreline protection is the use of vertical bulkheads that utilize sheet steel piling – an approach that is effective in high energy environments but is the least desirable in terms of enhancing or protecting wildlife habitat. On the other hand, natural, sloped shore protection can be used in low energy situations and are more conducive to wildlife habitat conservation.
Cold Spring is located in a high energy portion of the Hudson. Here, the river is narrow and flows are fast. Ice and shipping also contribute to shoreline erosion. Winds funnel through the Hudson Highlands adding to the “high energy” environment. Miller said that the village shoreline includes some of the most significant subsurface aquatic vegetation (SAV) habitat on the entire river. SAV areas are located at the northern and southern section of the Cold Spring waterfront. Because that type of habitat has been devastated along much of the river, he said DEC is very protective of remaining SAV areas. “DEC is a very protective and conservative agency when it comes to habitat (protection).” The Dockside property faces serious erosion problems and Miller was asked what approach might be most effective in protecting it. “The best bet”¦is to armor it with a mixed grade of rip rap. A lot of people don’t like it but it won’t wash away. It’s the easiest and cheapest way” he said. “But you need to be sure there is diversity in the size (of stone).You can also plant trees and other vegetation to establish a root structure to help protect the shore.”
Special Board member Anthony Phillips commented that rip rap is costly and that in the past it was brought in from construction sites free of charge. With the downturn in the economy that scenario is unlikely now. Miller said that relatively speaking rip rap is still the least expensive option.
Anne Impellizzeri, Vice Chair of the Special Board, asked Miller for insight regarding some of the uses being discussed for the Dockside property – including floating docks and moorings for passenger boats. Miller said he would have to look more closely at the property but that pylons often indicate where the water’s edge used to be and that in many communities there is a desire to fill out to that point. “DEC doesn’t always see it that way” he said. “Once the shoreline erodes away it can become a functioning habitat – habitat that has suffered significant losses over the years. You can try [to fill] but you’re going to have to justify every square foot. You can’t do it just because you think it would be nice to do.” 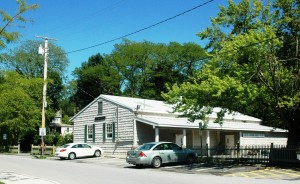 While Dockside is threatened by erosion, the Cold Spring Boat Club located just downstream faces the opposite problem – excessive deposition of silt. Phillips went so far as to say, “Within five years the boat club won’t be accessible.” Miller explained that the Cold Spring main dock is likely the culprit. “Local hydrology has been altered by the dock. It acts as a groin.” He said that as water flows downstream it encounters the dock, creating an eddy which reduces flow velocity which in turn results in sediment being deposited in the area of the boat club.
Phillips asked how difficult it would be to be to get a dredging permit to remove the sediment. “A dredging permit is not completely out of the question” Miller said. “There would be a habitat review”¦and …we live in a contaminated world.” He pointed out that dredging would disturb contaminated material which creates a number of concerns. The presence of cadmium and other toxic pollutants such as coal tar along and near the waterfront is not unique to Cold Spring. “It’s like that with any Hudson River community. It’s not an issue until you start moving soil” Miller said. Asked if other Hudson River towns have successfully removed contaminated material in order to develop their waterfront, Miller said that none came to mind. He said that when communities look closely at what is involved they generally opt not to disturb the contaminants.
In the end Miller recommended that Cold Spring consider a multiple-use approach to developing its waterfront to include recreation, view-sheds, boating, open space and community development. “Stay way from a ‘one size fits all’ approach.” He cited Cornwall where various groups advocated for single shoreline treatments such as rip rap or sheet steel break-walls. Instead he said, “Consider the range of shoreline types here. And think about matching uses and design with compatible shoreline locations.”
Special Board chair Mike Armstrong asked if funding assistance might be available from New York State. “In better times I’d have an application with me. These days we don’t do that” Miller said. He also said that having an approved LWRP usually opens up funding possibilities from the New York Department of State, but he could not speak for that agency. Miller’s power point presentation ended with a simple statement. “The river is the reason – take care of it.”
In other business Armstrong reported that $23,000 remains of the $50,000 budgeted for completion of the LWRP. He presented a rough outline of how those funds could be spent through completion of the plan in November – including such items as meeting expenses, mapping, graphics and other costs. “To have only $23,000 [remaining] was bit of a surprise to me” he said. He asked Special Board members to review the spreadsheet that he provided in preparation for discussions at the board’s next meeting on March 10.