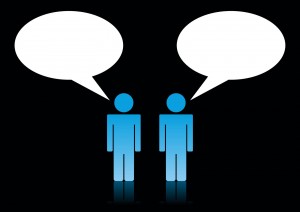 For the second time in a week, candidates for mayor and trustee for the Village of Cold Spring faced each other in a public forum. The March 7 debate was held in the Haldane school cafeteria and was hosted by the Putnam County News & Recorder. About 30 residents attended.
Much has been made of Village finances in his campaign, just as it was two years ago when Seth Gallagher defeated incumbent mayor Anthony Phillips who had served in that position for 16 years. At Monday’s debate Phillips commented on legal fees of $230,000 incurred when he was in office. “It was a problem and I accepted responsibility for it as mayor” he said. He also acknowledged problems with the former village treasurer but said that Gallagher bore some responsibility for a deficit the village faced then because he had served as a trustee while Phillips was mayor. Phillips said that the deficit was as less than $500 at the end of his term of office. Gallagher said he “had a problem” with Phillips’ numbers and put the deficit at $95,000, a figure he said was confirmed by the State Comptroller’s office. Referring to Phillips’ handling of Village finances Gallagher said “There was no oversight whatsoever”¦ There was no attempt to balance the budget.”
When the debate turned to the Village’s handling of snow removal this winter, Phillips went on the offensive, accusing Gallagher of poor management and poor leadership. “I’m not here to criticize the Highway Department. They went where the mayor [Gallagher] said snow should be removed.” He said that Fishkill Road had no parking signs along it for four 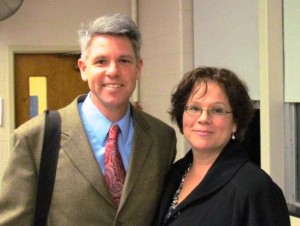 weeks because snow had not been removed. Gallagher said that one of the first things he did as mayor was to have the police and highway department work together directly regarding snow removal and that under Phillips the police department felt it was being second guessed. “The village came through it [the winter] very positively. Sometimes we had double crews. They did an incredible job.”
If there is one area where Phillips and Gallagher probably agree it is that they have very different management styles. They were asked to describe how they see themselves operating as mayor. “Everyone knows I’m hands on. I have the experience from the construction industry to run the village. I get out on the street and talk to people” Phillips said. Gallagher said, “I have a different style. I have good relations with our employees. I’m respectful and let them do their job. The police felt they were micromanaged [under Phillips].”
When Phillips tried to criticize Gallagher’s handling of contract negotiations with Village employees Gallagher shot back, saying that contracts can only be negotiated with unions. Village employees are not unionized. “Things done in the past were illegal. He knows I can’t talk about negotiations [currently underway]. We’re negotiating in good faith. There is no acrimony” Gallagher said.
Their views on local business and tourism also underlined differences between the two. Gallagher said that few Main Street storefronts are now closed and that the parking waiver he instituted has helped business. He also said that encouraging visitors to come to Cold Spring by boat and train “can really help businesses” while not creating traffic problems. He advocated having more Bed and Breakfast establishments to cater to overnight visitors. Phillips said that he would work with the Chamber of Commerce, now under new leadership, to help business. “We can have a more positive approach to 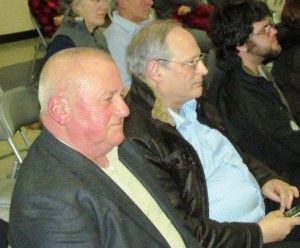 business” he said. He also said he plans to put together a group to deal with issues raised by tourists visiting Cold Spring – including motorcycle noise and hikers coming off the train. He also expressed doubts about the viability of some of the newer businesses. “I question the reason for some of them being here. In difficult times I’m not sure some of the shops opening are appropriate.” Gallagher responded to Phillips’ earlier statement saying, “I don’t see a problem with hikers. It’s (the train) the best way to get people here.”
In his closing statement Philips said “there is talk in this administration to put in place a garbage and energy tax. On my watch that will not happen.” He said that the Village is “on the verge of signing an agreement with DEC [New York State Department of Environmental Conservation] to remediate only 20 percent of the contamination on New Street”¦.we cannot allow this to happen.” He again mentioned the difficulties of this winter stating that “”¦sound leadership would have made it easier.” He also cited the importance of the Village’s relationship with Putnam County, a relationship he has said has slipped under Gallagher. “I will reach out and resolve our differences.”
Gallagher challenged Phillips’ suggestion that a new tax is in the offing. “For the record — there won’t be a garbage tax.” He cited progress made during his time in office that he said includes a balanced budget, a fund surplus, repairs to sidewalks, an overhaul of the building department and new revenue sources. “But there is still much to do,” Gallagher said, listing the need to increase flows in the Village water system; repairs to reservoir dams and Main Street infrastructure as priorities. Voters go to the polls on March 15.
Photos by M. Turton

One thought on “Cold Spring Mayoral Candidates Square off — Again”