Advocates of gun-rights plan a major rally outside the Town Hall on Thursday evening, to protest a draft town law to bar firearms from Town of Philipstown properties. However, Supervisor Richard Shea said March 30 that he does not foresee immediate enactment of the draft anti-gun law and that to reach the same end the Town Board instead is considering assorted options, including reliance on existing legislation and a possible understanding or accommodation with gun-owners.

“What we are trying to regulate is what goes on at a town meeting and what goes on at our Rec Center,” he said. “I think we can do this without adopting a new law. Right now we’re going to work through some of the issues” and evaluate a “programmatic” approach, he told Philipstown.info after a Town Board workshop.

The “programmatic” may reflect the pragmatic.

“Is it worth taking on this issue right now?” Shea asked rhetorically. “Is it worth going to court over this?”

He enumerated the projects underway at the Town Board, including rezoning. “You have to get from Point A to Point B on the zoning before you start going off on tangents. My over-arching concern right now is getting the zoning passed. I know people are going to say, ‘you’re backing away from this” gun-control initiative, he acknowledged. Nevertheless, “I have to think about the whole town.”

When the Town Board held a public hearing on the proposed gun initiative, he added, “we got the distinct impression certain members of the community were not happy with the law.” Gun owners denounced the measure as a violation of their Second Amendment rights. Shea, a Democrat, said he heard a lot of rhetoric that evening but “what I didn’t hear was a lot of helpful suggestions” on curbing threatening conduct or intimidation by gun-bearers at contentious public meetings. As a result, he said, he later met with local fish-fur-and-game activists. “We had a productive hour and a half conversation. We tried to say, ‘how are we going to make this work for everybody?'”

At the Town Board, “we don’t care how we do it, we just want to get a method that works for us,” he explained. “Under no circumstances do we think there should be firearms inside the recreation building. I also do not believe there’s any reason for guns at a town meeting.”

Drafted by Town Attorney Edward W. Doyle, the proposed town law would “prohibit the possession, transport, carrying, or open display of any weapon in certain public buildings of the Town of Philipstown” by anyone, except for law enforcement officers.  The definition of “weapon” includes not only “any firearm” but various knives, explosive devices, and wide-ranging list of other instruments of mayhem.

Interest in banning guns followed an incident at a Jan. 15 town-sponsored forum at which a man disparaged the Town Board, adding that  he was “packing,” an apparent reference to a concealed handgun.  Shea later said the remark had been explained away as an ill-conceived joke.

Gun-rights groups gear up for fight

On March 19, the N.Y. State Rifle & Pistol Association (NYSRPA) announced a rally outside Town Hall at 7:30 p.m. on April 7, because Philipstown “is contemplating a gun control ordinance to prohibit legally owned firearms on town property. Gun owners are encouraged to contact Town Board members to express their opposition.”

Officials at the 40,000-member NYSRPA, an affiliate of the National Rifle Association (NRA), said they had been involved in planning the protest at the behest of local members and credited the Garrison Fish and Game Club for alerting them. “I have been surprised at the amount of people that have called and emailed us about the Philipstown issue,” said NYSRPA President Thomas H. King of East Greenbush. King said he expected “200-300 well-behaved people to show up for the demonstration.  I will be disappointed if we don’t get that high a number.”

King said he believed the opposition to the proposed law extends beyond a ban on carrying weapons onto town property. “Pistol owners are the most investigated, vetted people around,” he said.  “We’re the good guys. We’re not lawbreakers; we’re not criminals. The focus should be on fixing problems such as crime, drugs and the violence that stems from them.  It shouldn’t be on lawful gun owners,” he said.  “What does this law really do other than regulate a lawful citizen, it doesn’t promote public safety,” he added.

King suggested Shea is easing up “because so much heat is being applied. People are really upset; they are tired of all the talk about taking guns away from legal owners.” However, at the March 3 public hearing, John Van Tassel, a Town Board member and Democrat, wondered about the gun-owner who becomes enraged during intense public debate. “My concern is somebody who is stable [mentally] when outside and comes in and loses their temper,” while carrying a gun, he said. “I have no opposition to guns. I hunt. I just don’t see any need for them to come to a public meeting.”

With several hot issues generating intense interest in Philipstown in recent months, Shea said in January, “the level of discourse has exceeded what I would say is civil and also gotten to the point of threatening, at times.” The Town Board pursued the draft law “because when we have a meeting we not only conduct the meeting, we guarantee the safety of people at the meeting,” he said then.

NYSRPA Legislative and Political Director Jacob J. Riper, of Pine Plains, said the organization objects to what he called efforts by local governments to preempt state law on gun regulation, a move his group considers unlawful. He said the issue had come up several times in New York and elsewhere and that the NYSRPA, with NRA lawyers, is devising strategies to keep the idea from gaining traction.

No recent court test of the issue has occurred in part because there have been no incidents where local governments tried to enforce such a local ordinance, Riper said.

Like the NYSRPA, the Philipstown Republican Committee is organizing support for the gun-rights rally, though it has reportedly asked participants to leave their guns at home that night. Philipstown Republican Chairperson Terry Polhemus did not respond to a Philipstown.info e-mail inquiring about the rally and the committee’s stance, including the question of whether irony exists when a group holds a public event to protest a ban on guns in public assemblies but asks participants at that particular assembly to leave their guns at home.

Reached by telephone on Sunday (April 3), Polhemus said she had not answered the e-mail because “I wasn’t able to get approval from the whole committee [to comment]. I’m not at liberty to say” why the group chose to remain silent, she added. “I’m not going to respond.”

State Senator Greg Ball, a Republican, also promotes the rally, with a color flyer attesting that “some in state governments are considering laws that will destroy your Second Amendment. Locally, some are contemplating an ordinance to prohibit legally owned firearms on town property. Contact them to express your opposition.”

Ball’s State Senate office website also prominently displays a petition that he posted March 30, saying that “despite the intention of the Founding Fathers, some in both state government and local government are considering measures that could restrict your right to possess and use legally owned firearms.” The senator did not respond to an e-mail seeking comment and clarification.

The Second Amendment to the Constitution mentions “arms,” a generic term for weapons, though not guns or individuals specifically. It reads:  “A well-regulated militia, being necessary to the security of a free state, the right of the people to keep and bear arms, shall not be infringed.” 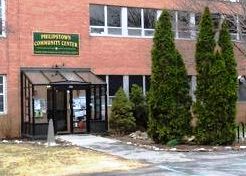 A hunter himself, Shea emphasized at the March 3 hearing that “we’re not trying to take away people’s guns,” only to keep them out of public meetings and town-owned recreational facilities. He questioned the rationale for the gun-rights rally April 7.

“It certainly seems politically motivated. When you start to throw politics into it, that’s when things start to break down” in civic discourse, he said. “If this turns into a big issue and we have a lot of people from outside the town coming in, it’s not going to be good for the town.”

As for Polhemus’ local opposition, he added: “Does she want to fight for the right to bring a gun into the recreation building where there’s 200 children?”

Guns are already off-limits on some public property in Philipstown. Local justice courts ban guns and metal detectors stand ready to screen the public for court proceedings, including those held in the same Town Hall room where guns could be prohibited during Town Board meetings.

Likewise, the codes of conduct for both the Haldane Central School District and the Garrison Union Free School District prohibit weapons on school premises. Using the same wording, both codes say that “all visitors are expected to abide by the rules for public conduct on school property contained in this code of conduct.”

The GUFS code subsequently declares that “no person, either alone or with others, shall possess or use weapons in or on school property or at a school function.” The Haldane code uses the same language, but adds an exemption, applying the policy “except in the case of law enforcement officers or except as specifically authorized by the school district.”

Haldane revised its basic code in 2008 and again in 2010. Updated in 2010, the GUFS code dates to 2005, though the district has had a policy since at least 2001, though the earlier version allowed weapons with the superintendent’s permission and on the persons of law-enforcement officers.

Former GUFS school board member Stan Freilich recalled evolution of the anti-gun rule. “At that time we had at least two parents — one subsequently became a member of the school board — who claimed that they were required by their jobs to carry their handguns at all times.”

He said that he believed one parent was a parole officer and the other a security guard. “The school board passed a regulation that no guns were to be carried in the school building. We told these individuals that this was the rule and that they could not bring their handguns into the building. No lawsuit was brought by the NRA or any individual,” he said. “Our concern was for the safety of all of the children and faculty.” He declined to identify the parent-turned-school board member who carried a gun.