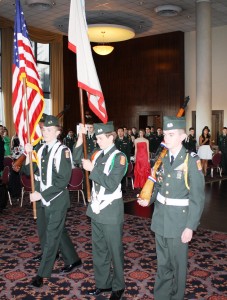 The 9th annual Military Ball was held on March 26, 2011 at the West Point Club.  It is an annual event held in the spring to give cadets a chance to experience a fun event with dancing, delicious food, and a taste of a formal military event.  In the words of Cadet Lieutenant (C/LTC) Jeremy Hetman, “The food is great and it is an outstanding time of fun and fellowship with other cadets and special guests.”  The guest speaker at this year’s ball was Command Sergeant Major (CSM) Rodney Harris, father of Cadet Second Lieutenant (C/2LT) Austin Harris.
The Military Ball is a special event because it is open to other students in the school and community.  Many students look forward to the Military Ball even if they aren’t in Junior Reserve Officer Training Corps (JROTC.)  In the past there 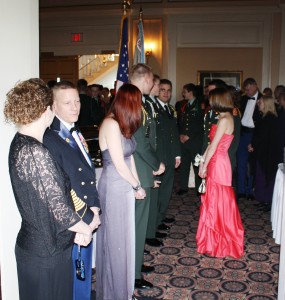 have been guests from other JROTC programs, as well as other schools in the area.  The dance segment of the ball is the favorite among cadets.  Student cadets form committees to chose music for the dance. “The dance segment of the ball was really fun, especially when people came out and actually started dancing to some great music.” said Cadet John Njoga.  The Military Ball has a special meaning for senior cadets who speak about who made their high school experience worthwhile and who has meant the most to them over the course of their high school JROTC career.  A truly special event once again proved to be a pinnacle of the 2010-2011 James I O’Neill Buffalo Soldier Squadron school year.
Photos courtesy of O’Neill JROTC

Jake Kail is a senior at O’Neill HS and the James I O’Neill JROTC Public Affairs Officer.