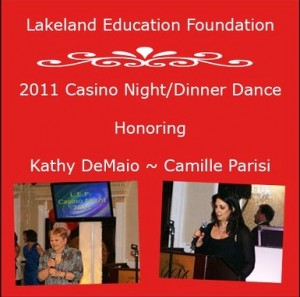 The Lakeland Education Foundation (LEF) set a record this year at its annual Casino Night event on March 19, raising more than $32,000 and breaking its previous single event fundraising record by a 22 percent margin. This year’s event was held at the Villa Barone in Mahopac, with more than 320 guests, a record-setting silent auction and more than a dozen gaming tables. According to event co-chairs and trustees Rachelle Nardelli and Joanne Comerford, the event had outgrown its previous venue. “The Colonial Terrace was always very supportive and a great place to hold our annual party, but we just needed more space!” said Joanne Comerford.
Silent auction committee co-chairs, Diane and Denise Kness started planning and soliciting auction items a full year ago — the day after the March 2010 Casino Night. “It was a very long year, but in hindsight it was worth every minute” said Diane Kness. With roughly 75 items collected and offered for auction, the blockbuster success of the silent auction appears to have made all the difference to Casino Night. “We had a committee of more than a dozen trustees and volunteers who made all this possible”, said Denise Kness (also LEF vice-president) after the auction sales numbers were tallied. 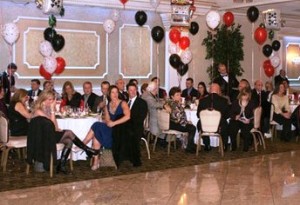 Some of the 320 in attendance

The LEF also took time during the evening to honor two of this year’s biggest supporters: Katherine DeMaio and Camille Parisi. Ms. DeMaio, in her role as secretary to Lakeland’s Superintendent of Schools has been invaluable, always offering her advice, recommendations and willingness to facilitate LEF functions within the district. According to Mike Sitzer, LEF president, “for many years now Kathy has thankfully been our go-to person within the administration”.  Kathy has also been a regular volunteer, helping out at most LEF functions.
Ms. Camille Parisi, a sixth grade teacher at Lakeland Copper Beech Middle School, has for many years been an LEF proponent within the schools, encouraging staff to apply for LEF grants, raising LEF awareness, fundraising, and volunteering wherever needed. “If only we had more supporters like Camille!” said event co-chair Rachelle Nardelli.
The LEF is actively looking for new volunteers, trustees and donors. If you are interested in helping the LEF to raise money to fund education grants to the Lakeland Schools, please email your contact info to [email protected] or call Mike Sitzer at 914-582-1952.
Photos courtesy of LEF