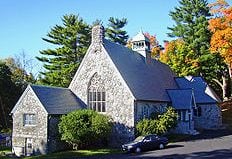 The 26-member St. Phillip’s Choir will perform Johannes Brahms’ A German Requiem on Good Friday evening, April 22, at 7:30 p.m. with soloists Julie Heckert, soprano and Michael McKee, baritone. The pianists will be Ruthanne Schempf and Sylvia Buccelli.
Brahms wrote his requiem between the years 1865 and 1868. It was called a German requiem to distinguish itself from the requiems with Latin text based on the Roman Catholic tradition. Brahms assembled the libretto himself, drawing on a variety of scriptural sources. He scored his requiem for a chorus, soloists and a large orchestra. In 1871, he wrote a version of the entire score for piano duet or piano four hands, presumably so it could be performed in the home. This setting enables the piano duet to assume the orchestral part to accompany a chorus and this is the version the St. Philip’s Choir will perform.
The St. Philip’s Choir members, under the direction of Dr. Durward Entrekin, also Professor Music at Mount Saint Mary College in Newburgh, perform a repertoire ranging from 16th to 20th century composers every Sunday and at special concerts in conjunction with major Church events. The performance is open to the public and there is no admission charge. St. Philip’s Church is located across from Garrison school, where overflow parking will be available. The Reverend Frank Geer is the church’s rector.

One thought on “Brahms’ Requiem to be sung by St. Philip’s Choir on Good Friday”