The manufactured gas plant, behind the Ferris dock, on a map from the mid-1860s

Cooperation between Cold Spring and the New York State Department of Environmental Conservation (DEC) over issues related to coal tar contamination advanced last week when the Village Board granted the agency an easement on the one-acre site containing the Cold Spring Boat Club. The Boat Club occupies village-owned land where a mid-19th-century manufactured-gas plant converted coal into fuel for lights, stoves and industry, leaving a toxic residue beneath the surface along with vestiges of the factory, near the Hudson River.
According to Mayor Seth Gallagher, the “indenture” or contract with the DEC does not govern the nature of the upcoming clean-up of the coal tar. Instead, it grants the state the ongoing right to monitor the tract and ban certain activities there. (To cite just one example: the village could never use the ground to graze cows later slaughtered for the dinner table.) “This easement has nothing to do with the extent of the clean-up” of the pollution, Gallagher said at the Village Board’s April 26 workshop session. “This only has to do with what happens at the site basically from now into the foreseeable future and, I think, in perpetuity.” Current New York State plans do not call for eradicating 100 percent of the coal tar from the field of underground contamination; even with an intensive extraction pockets could remain.

The six-page contract states that New York finds “that it is in the public interest to encourage the remediation of abandoned and likely contaminated properties that threaten the health and vitality of the communities they burden while at the same time ensuring the protection of public health and the environment.” It likewise points out that the DEC creates environmental easements “as an enforceable means of ensuring “¦ the restriction of future uses of the land, when an environmental remediation project leaves residual contamination at levels that have been determined safe for a specific use, but not all uses”¦ .” Specifically, the easement grants the DEC access “in, on, over, under, and upon the controlled property” — the Boat Club site.
Along with prohibiting use of the area “for raising livestock or producing animal products for human consumption,” the easement document stipulates that groundwater and other environmental or public health-related monitoring must be carried out as directed in a formal site management plan and that “all future activities on the property that will disturb remaining contaminated material must be conducted” in accordance with the same plan. The agreement states that the property may be used for restricted residential, commercial, and industrial endeavors and that “access to the site must be provided” by the village to the DEC “with 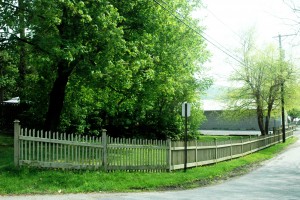 Area of the Cold Spring Boat Club, the building in the back, looking west from Market Street, with New Street on the right

reasonable prior notice “¦ to assure compliance with the restrictions” established. Gallagher said the village must have such an easement in place to avoid legal questions. “We’re required to do it in order to maintain our release from liability,” he informed the four trustees, before suggesting they pass a resolution ratifying the easement agreement.
Trustee Airinhos Serradas advised that they couch their authorization as an approval, not an acceptance. “We’re not accepting anything. We’re giving it away,” he said.
“We’re accepting the obligations,” Gallagher replied.
“As long as it doesn’t create a situation where we’re bound by anything in terms of what the village decides in the future,” Serradas answered.
“This totally binds us,” Gallagher told him. “That’s the whole purpose of it.”
Serradas clarified his intent to say he referred to a village role in decisions on the clean-up process. “This has nothing to do with the clean-up,” Gallagher reiterated. The board then voted 5 to 0 to adopt the easement agreement, allowing Gallagher to sign it on behalf of the village.
Photos by L.S. Armstrong