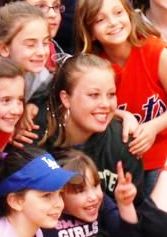 For the second time this year Haldane High School had cause to celebrate one of their student athletes securing a scholarship to attend a Division l college.  On Monday evening, May 2, Chelsea Lisikatos, a star softball pitcher, on her way to a 1,000 strikeout career, signed a letter of intent to accept an offer from the University of North Carolina, Charlotte. Last fall, basketball star, Liz Milner, accepted an athletic scholarship to Fordham University.  Like Milner, many schools recruited Lisikatos.  She told Philipstown.info the UNC, Charlotte campus “felt like the right place for me.” 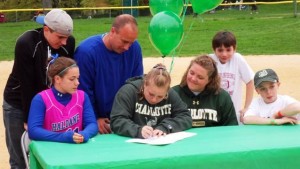 Surrounded by her family, Chelsea Lisikatos signs her letter of intent

Seated at a table at the pitchers mound on the school field she has so often played on, surrounded by her parents and siblings, Lisikatos inked the acceptance document while her mother, Chantel, co-signed.  Nick Lisikatos, Chelsea’s father and team coach and her sister and teammate, Sammy, both spoke briefly to a crowd of about 100 well wishers Sammy tearfully declared Chelsea “a great teammate and a great older sister.”  Nick praised his daughter’s hard work and thanked the community and the school for being so supportive of his daughter’s aspirations. “The school has done all the right things in supporting her since she started pitching as 7th grader,” he said. 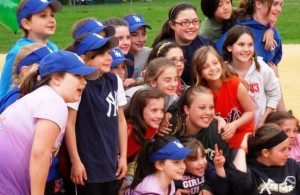 Chelsea poses with her fans

Tom Cunningham, athletic director and principal Brian Alm both paid tribute to Chelsea”s accomplishment.  During her own remarks, Chelsea thanked everyone for their support and offered a message to some fans. “It’s not just a game, I learned so many things during all the hours playing on this field, all you young girls, that should be your takeaway from this, OK?
Photos by K. Foley