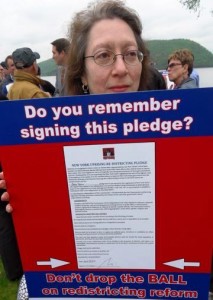 A coalition of Democratic Party and good-government groups assembled in Peekskill’s Riverfront Green Park last Saturday, May 14, to publicly pressure Republican State Sen. Greg Ball to support Gov. Andrew Cuomo’s legislation to create a non-partisan commission to redraw congressional and state legislative district lines based on the 2010 census data.  Several rally speakers called Senator Ball to task for what they asserted was his betrayal of a 2010 campaign pledge to support non-partisan redistricting.  Ball, along with many state legislators of both parties, signed a pledge sponsored by former New York City Mayor Ed Koch supporting the idea of a commission to draw the lines. Philipstown is part of Ball’s district.
Traditionally both houses of the state legislature redraw the lines after the census. If the procedure doesn’t change, the legislature will do so next year in time for the November 2012 elections. Numerous critics have claimed the lines often end up convoluted and confusing and are designed to ensure that majority parties in either house of the legislature maintain their electoral advantage for the next decade. Republicans currently control the State Senate and Democrats the Assembly.
While chanting “honor what you signed, draw fair lines,” many of the approximately 50 people present held posters with facsimiles of the pledge with Senator Ball’s signature. About half the group representing 15 different organizations were from Westchester and Putnam Counties with the other half having arrived by bus from New York City.  “Ball stood up and told the state legislature it was the most dysfunctional body in the United States.  He signed Koch’s pledge and promised transparency. We thought this was a Republican who will vote independently. And now he has cynically walked away from the pledge,” said Bill Samuels, founder of the New Roosevelt Initiative, a group seeking legislative reform and a major sponsor of the rally.
Ball has joined his Republican colleagues in the State Senate in arguing he still supports the pledge but believes a state constitutional amendment is required before the power can be given to a non-partisan commission. The State Senate has passed a bill that would begin the amendment process. It would delay implementing the commission idea until the 2022 elections given that it has to be passed in two successive legislative sessions and then in a popular referendum. Governor Cuomo has said he will not sign any redistricting legislation that doesn’t create or come from a non-partisan commission. His refusal would force the issue into the courts, a likely outcome if all parties maintain their current positions.  Assembly Speaker Sheldon Silver has said the Assembly will pass the governor’s bill, but they have not done so yet. 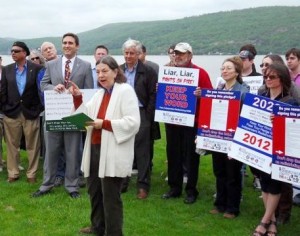 A Philipstown resident, Margaret Yonco-Haines, representing the Putnam County Chapter of the New York Democratic Lawyers Council, told the participants: “As a voting rights project, our mission is to protect the right to vote by making sure each and every vote counts. Greg Ball’s Senate district has 2,700 fewer people than the average Senate district and 17,479 fewer people than the most populated Senate district. Partisan gerrymandering that over-populates certain districts and under-populates others in order to maintain or strengthen a political party’s majority makes the votes of certain voters count more than others.”
Senator Ball issued a statement after the rally decrying what he considered its partisan nature.  He said in part: “The ‘protest’ organizers themselves admit to representing over a dozen partisan, Democratic groups. Unfortunately I think they are either misinformed or lost, because I have supported and passed constitutional, fair, non-partisan redistricting in the Senate and I would further support truly independent redistricting based upon geography and demographics. What I will not support is giving the Democratic Party machine complete control to redistrict all Republicans into oblivion”¦ . Let’s focus on jobs and taxes, not cheap political tricks.”
“I want my vote to count and I want the lines drawn in a non-partisan way,” said rally attendee Joyce Blum, of Philipstown for Democracy, in an interview as the one-hour rally ended. “Ball shouldn’t go back on his word,” she added.
Photos by K. Foley

One thought on “Rally Protests Ball Stand on Redistricting”