Scenic Hudson’s project could be approved by summer

The West Point Foundry Preserve park proposed by Scenic Hudson took a giant step toward realization when the Cold Spring Planning Board authorized formal notification to other federal, state and local agencies of its intent to assume lead agency status.  The action on May 24 comes under New York’s State Environmental Quality Review law (SEQR) and involves forwarding an Environmental Assessment Form along with the project’s site plans to the other agencies, giving the agencies 30 days to either accept the Planning Board’s lead role or raise questions or objections to the project.  Among the agencies to be notified are the federal Army Corps of Engineers, three different divisions of the state Department of Environmental Conservation, and the state Office of Parks, Recreation and Historic Places.  The Town of Philipstown and the Village of Nelsonville, although not part of the SEQR review, will also be notified. The other agencies involved are collectively concerned with a project’s impact on waterways, wetlands, animal wildlife, fish species and disposal of hazardous waste, among similar matters. Scenic Hudson, which has created several parks and preserves in the Hudson Valley, has long experience with these agencies and has kept them apprised of the work on the Foundry Preserve. 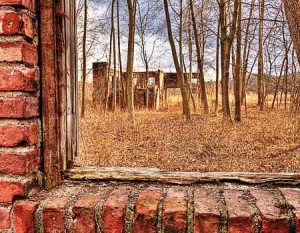 The board’s unanimous decision to go forward under SEQR, while not approval, signals it no longer has serious concerns about any negative impact on the community or the landscape. Allowing the Cold Spring Planning Board to proceed as lead agency essentially means the board can then act on behalf of the other government bodies.  Assuming no objections by the other agencies, a Planning Board public hearing could be held as early as July before the board holds a final vote on the plan. No public opposition to the project has surfaced to date at Planning Board sessions.
In January of this year, Scenic Hudson officials had urged the board to begin the SEQR process and expressed anxiety over the impact of delay on construction costs for the $3.5 million project, which includes both restoration of natural areas and hiking trails and the installation of historical replicas of foundry functions around the 86-acre site.  At this latest meeting they expressed gratitude to the board for moving ahead to this critical stage. “We are grateful for the board’s efforts and its willingness to stay with it throughout this process,” said Steve Rosenberg, executive director of the Scenic Hudson Land Trust. Construction could begin in the fall and then continue in the spring for a summer 2012 opening.
At the meeting the board heard a traffic study report from a Scenic Hudson consultant that concluded there would be minimal impact to Cold Spring traffic patterns on the few days a year special events are held on the site. Scenic Hudson said it had scaled back the amount of parking from 100 spaces to 50 and planned fewer events at the site.  Previously the group said it had decided not to use an internal road to allow vehicular entry from Chestnut Street.  All vehicle traffic will enter via Rock Street to Kemble Avenue.  Scenic Hudson has emphasized that it will seek to attract pedestrian visitors via the Metro-North entrance and school visitors who will get dropped off by buses on Chestnut Street and enter there.  The board expressed satisfaction with the report.
One sticking point between the board and Scenic Hudson may be over the idea of a sidewalk along Kemble Avenue.  Two board members, Joseph Immorlica and Placito Sgro, have argued for months a sidewalk should be built for pedestrian safety. Scenic Hudson has demurred, citing cost and inconsistency with the restoration of a natural area. The three other board members, chair Joseph Barbaro, Arne Saari and Karen Doyle, have agreed with Scenic Hudson.  This past meeting was Doyle’s last.  It might be up to a new appointee to the board to settle the matter.
Photo by Robert Rodriquez, Jr.