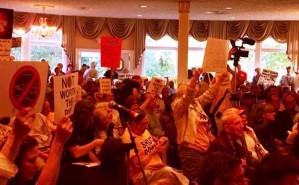 Vocal crowd of over 400 at NRC hearing

The federal Nuclear Regulatory Commission (NRC) has concluded that in 2010 the two nuclear reactors at the Entergy-owned Indian Point power plant operated “safely and in a manner that preserved the public health and safety and protected the environment.” The NRC reported its annual findings at a crowded and noisy public meeting on June 2 at the Colonial Terrace, a catering place in Cortlandt. The report was not well received by most of the over 400 people in attendance, many of whom booed, hissed and shouted catcalls until NRC officials cut short the presentation and moved on to the public comment segment of the meeting.
During the presentation, NRC staff described a process involving nearly 12,000 hours of on-site inspection of the Indian Point facility. Each of the reactors had two full-time resident inspectors who conducted daily inspections and had “unfettered access to all plant activities related to nuclear safety and security,” according to the NRC.  In addition, the NRC said it sent several teams of various experts to inspect the plant throughout the year. During the meeting and at a media briefing beforehand, David Lew, the NRC’s regional deputy administrator, reiterated that inspectors had not found evidence of any problems at Indian Point that could be considered “significant issues.”
“We have a significant amount of oversight, inspectors are on site, licensee performance is well understood, and based on our assessment, the plant has operated safely,” he said.  Lew emphasized the NRC requirement for “defense-in-depth”, which he said Indian Point meets. The concept includes: redundant and diverse safety systems, multiple physical barriers to contain radioactive material and testing and inspection of systems important to safety and emergency planning. The NRC finding comes as a prelude to the Commission’s long anticipated decision on Entergy’s request for a 20-year extension of its license to operate reactors 2 and 3 at the plant, which it filed four years ago.  Reactor 1 was shut down several years ago. 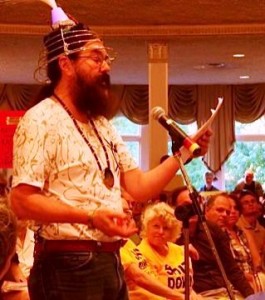 The meeting, which lasted three and a half hours, had a theatrical quality, with much melodrama and some vaudeville.  Many of the players, protestors and government officials alike, displayed a practiced air derived from multiple performances of the same script repeated over many years.  Dozens of speakers assailed the panel of NRC officials with impassioned pleas, dire warnings, harsh invective and the occasional homemade protest song. Three different chapters of Raging Grannies harmonized at the microphone.  Some speakers wore colorful costumes. Hand-held signs, banners and tee shirts, most with anti-nuclear power slogans, were seen throughout the hall. No one paid attention to the prescribed 90-second limit per speaker.
The speakers, many representing organizations such as Riverkeeper, Hudson River Sloop Clearwater, Greenpeace and the Indian Point Safe Energy Coalition or elected officials such as three members of Congress, Reps. Eliot Engel and Nita Lowey and Sen. Kirsten Gillibrand, and a bevy of local officials, covered a broad range of perspectives on the threats arrayed against Indian Point—global warming, earthquakes, tornadoes, terrorist attacks, nearby natural gas pipelines and the ageing infrastructure of the plant itself—as well the threats the plant poses to the health, environment and the economy of the people in the surrounding communities, including New York Cit, radiation leaks, higher cancer rates, compromised water supply, endangered wildlife and fish, falling home values and general mayhem if an incident at the plant requires invoking the evacuation plan.
On another opposition front, Riverkeeper and some of the other groups have also filed lawsuits to, among other things, compel the NRC staff to take into consideration the long-term status of the 1,100 tons of radioactive waste already stored at Indian Point before deciding to renew the Indian Point operating license for 20 more years. Under current regulations spent fuel rods can be housed on site for 60 years after a plant closes.  No central storage facility for spent nuclear fuel exists in the United States. The matter is before a panel of judges at the Atomic Safety and Licensing Board. 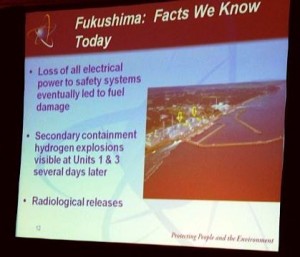 Fukushima
As expected, the disaster on March 11 at the Japanese Fukushima-Daiichi nuclear plant that precipitated a widespread evacuation (still in force) provided the backdrop for the entire evening. One speaker after another invoked the events in Japan to call for, among other things, a moratorium on relicensing Indian Point, the establishment of an independent presidential commission to review evacuation plans, the use of new-plant standards for relicensing and simply closing the Indian Point reactors permanently.
“The reason I have long opposed the operation and relicensing of Indian Point is because of the widespread consensus among emergency experts that there is no way to safely evacuate people within the radius experts agree on,” said Assemblywoman Ellen Jaffee (Dem. 95th district).  Jaffee accused NRC officials of ignoring a 30-year-old study they commissioned, which concluded 17 miles, not the current 10, was the appropriate distance for an evacuation zone.  She further accused the NRC of hypocrisy in recommending a 50-mile evacuation for Americans living in Japan in the aftermath of a radiation leak.
The 50-mile recommendation by U.S officials was referred to repeatedly throughout the meeting, as speakers demanded the same standard be applied to Indian Point.  Opponents believe that recognition of a 50-mile zone, which would encompass much of New York City and other suburban areas to the west and east of the site, affecting upwards of 20 million people, demonstrates the risk and futility of continuing to operate Indian Point. In response to such a comment from Paul Gallay, Riverkeeper’s executive director, an NRC scientist countered that the 50-mile Japan recommendation resulted from “an abundance of caution in a particular situation where we only had access to open source information with no access to our usual sources in the U.S. The decision was overly conservative given the information we have now about the situation.” 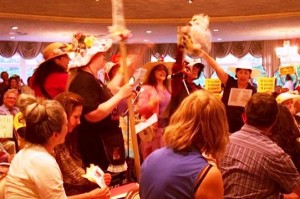 Mike Kaplowitz, a Westchester County legislator and active plant opponent, invited the NRC to have a dialogue out in the open with him and his colleagues. “When regulators insulate themselves from the people bad things that happen are compounded as we saw in Japan,” he said. The NRC said they would take the invitation under advisement. “We operate under a microscope,” said David Lew, speaking about NRC accountability. “We have the inspector general, the General Accounting Office and the Congressional oversight committees to answer to,” he said.

Defending the plant
Officials from Indian Point’s owner, Entergy Inc., kept a low profile during the proceedings. A few others, however, stepped to the microphone, braving considerable hectoring, to offer a counter perspective to the prevailing view. “The community has to understand that somebody has to do the tough job, and you do it with integrity and honesty,” said Jerry Kremer, a former veteran of the state Assembly, and now chair of the New York Affordable, Reliable Electricity Alliance.  Kremer cited two recent reports, from the office of New York City Mayor Michael Bloomberg and the New York Independent System Operator (the group that manages the electrical power grid). Both reports warned of critical electrical power loss and other problems if Indian Point is closed before a reliable replacement source is found.
Dorothy Forcina, a managing director at the Westchester Association, a leading business group, emphasized the importance of Indian Point to the regional economy with its 1,100 highly-paid workers and overall $5 billion in economic impact.  Addressing the NRC panel she said: “We believe safety should be subject to the tightest scrutiny and with full transparency. And we note that Indian Point has passed your rigorous tests for safety and environmental assessment.”  Forcina urged the NRC to move forward on the relicensing process.
Jerry Connolly, retired business manager of Boilermakers Local 5, a union that represents many Indian Point workers, criticized state officials for not addressing energy needs over many decades thus making Indian Point essential to the power grid.  “If you shut down Indian Point you will have to change your lifestyles, beginning with turning off the air conditioning in this room,” he said.

Aftermath
Opposition groups were generally satisfied that the large turnout, the media coverage and the presence of elected officials or their staff signals a rising awareness of Indian Point’s issues in the aftermath of the Japanese experience and the decision by the German government to close their nuclear plants in a short timeframe. It remains to be seen whether any action or argument can actually influence the NRC and Indian Point’s supporters to see the plant in a different light.
Photos by K. Foley