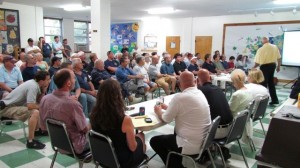 Many attended fire study forum sponsored by the town of Philipstown

Author of report stands by findings

With the atmosphere hot from scorching weather and scathing comments, Philipstown’s fire companies last week confronted both the author of a report highly critical of their approaches and the Town Board that hired him. By the end of a charged meeting, however, all sides acknowledged possible shortcomings and agreed on the merits of better cooperation to solve daunting problems.

The event, held Wednesday (June 8) at the Philipstown Recreation Center, involved a presentation by Ron Graner, a veteran firefighter, administrator, and consultant who explained his Fire Rescue & EMS Service Planning Report. A former Philipstown resident who began his career at the now-shuttered Nelsonville fire department, Graner drew impassioned and sometimes caustic reaction from members of the fire companies involved.

Facing a roomful of grim faces, Supervisor Richard Shea kicked off the event with ground rules. “We’re going to keep it respectful tonight,” he told the approximately 80-person audience. “We’re not going to have people insulting the board, the consultant, or anyone.”

Twice, he emphasized that dealing with fire and emergency service concerns would require ongoing effort. “This isn’t the end, it’s the beginning, the beginning of what’s probably a pretty lengthy process. Some things are short-term that we’re going to want to address right away. Those are safety concerns.”

John Van Tassel, a Town Board member and former chief of the North Highlands Fire Department, said that at a meeting  July 6, with a mediator present, emergency responders intend to begin “to, hopefully, mitigate the issues Ron [Graner] has addressed. Some will take a tremendous amount of work; some will take very little work.”

Firefighters made clear they do not believe consolidation is part of the picture of overall improvements. “We wish to go on record that, while we remain open to sensible ways in which to improve our services, we do not believe that consolidation into a single authority such as a Joint Fire District is an appropriate response at this time,” James Copeland, president of the Garrison Volunteer Fire Company, said, reading from a letter backed by the four fire departments and two ambulance corps. “The Town Board might consider this letter as evidence of our solidarity on this matter. We will continue to work with each other and the Town Board to address the salient points made in the report and other ideas for improving our service to Philipstown.”

The mutual statement accused Graner of “deceptively” comparing the volunteer agencies’ response times to those of paid departments. “As taxpayers, who care enough about our communities to volunteer, we find this comparison as manipulative as it is misleading. The report accuses our leadership of being ‘self-centered’ and `egocentric,’ primarily because we were unwilling to support the author in his premeditated agenda to recommend consolidation.”

Graner said “I recommended a joint fire district because I think it works.” His 119-page  report praised “a core group of extremely hard working and dedicated volunteers” serving fellow residents but sharply criticized certain agency attitudes and conduct, including what he termed a harmful “ego-centric department leadership” and disdain for public accountability. Examining the question “what is in the public’s best interest?”

Graner’s study urged dissolution of the current governing administrative structures of the existing agencies, which he strongly views as duplicative, and the formation of a single, joint fire district whose administrative structure also would oversee a single emergency medical service district. He pointed out that Philipstown taxpayers provide more than $2 million annually for fire and ambulance services and that part of his mandate was “to recommend how tax funds could be utilized more effectively and efficiently while still assuring safety for the community and safety for your dedicated volunteers.”

His report called a merger crucial and, among numerous other suggestions, advised that the town retain a trained mediator to reconcile differences between firefighters and elected officials and deal with “dangerous issues” confronting all.
|
The Town Board had put the mediator-idea to work almost immediately: Joseph P. Hines Jr., a psychologist and former New York City Fire Department fireman who became an FDNY counseling services field unit supervisor, book-ended the evening. Hines met with fire department officers in a closed session before the open forum, and his remarks later helped bring the program to an end.

Graner assured the audience that he holds “nothing but the highest level of respect for the dedication and devotion to duty that the active volunteers in Philipstown exhibit as they risk their lives and health for this community.“ In the study, “every issue we looked at was directed at safety,” he said. “The report is my objective view. I can’t change the facts. You may not like the facts, but they are the facts.”

Both in the report and in his presentation June 8, he criticized the fire departments for refusing to cooperate adequately in important aspects of his study, despite repeated requests from him and local government officials. The report also noted that the two ambulance corps did not participate at all. Graner said that public-funded agencies “have no business keeping anything secret when it has to do with the peoples’ money. The general public must be kept informed about the services being provided for their tax dollars.”

In fact, he said, “the lack of participation clearly provided some of the insight needed” to determine significant changes were in order. As for his blasts at the departments’ leadership, he said, “that’s a group thing. It’s not an attack on anybody individually” but on a collective mentality.

“He’s attacking people he’s not met,” said John Menzie, chairman of the board of the Continental Village Fire Department.

“I find it very troubling the way you came to town and basically said, `Your leaders are bad,” Michael Del Monte, a Garrison firefighter added. “I think you owe the leaders an apology.”

“I agree totally with that,” Graner answered. “I am sorry if my report sounded angry.  I wasn’t angry, I was extremely disappointed in the lack of agency participation and that shows in my writing.”

By proposing consolidation, “it seems you’re basing a conclusion on a lack of data,” Del Monte continued.

Joe Regele, a frequent observer and critic of the Garrison fire company’s fiscal management, commented that “whether or not consolidation is a good thing, we don’t know,” because the fire companies refused to supply Graner with material needed for a complete assessment. “Fire companies are supposed to respond to these surveys,” he said, adding later: “It’s too bad they threw Ron Graner under the bus.”

Michael Bowman, president of the Cold Spring Fire Company, said that “one of the reasons we didn’t participate is the impression that we were getting dragged into a fight that was not ours.” That said, he added, “we stand with our fellow firefighters. We do not believe consolidation is the way to go. To us at least it became a political thing and we didn’t want to get dragged into it.”

Graner refuted allegations of a political motivation. “My report is not part of the political agenda of the town supervisor and-or the mayor of Cold Spring or any other person,” he said. Based on his 50 years of experience, he said, “I don’t think it’s efficient or safe to have six different agencies doing the same thing in a town of this size.”

Nonetheless, he said, consolidation at an administrative level does not mean that individual firehouses must be closed. “I strongly support the concept of neighborhood fire stations” and “want local authorities to maintain the character of each – wherever fiscally and operationally possible,” he said.

Among concerns facing firefighters and the town Graner cited fire-flow limitations that can hinder operations if there isn’t enough water in village pipes or rural areas to control a blaze;  insufficient numbers of volunteers, firefighters’ perceptions that the public does not appreciate them and a feeling among some in the community that newcomers and women are not very welcome in fire companies,  communication confusion, and other serious issues, including whether firefighters, or enough of them, receive adequate training.

“If you think you can get trained at minimum levels, God have mercy on your soul,” he said. Should someone be seriously injured or die at an incident, lawyers for the victim or his or her family “are going to beat up on you. They’re going to take your money.” They also may well regard fire department officials as personally responsible and bring legal charges, alleging negligence, he warned.

Rich Pepe, with the Continental Village Fire Department, objected to the tone of the report and all the public commentary and blogging it spawned. “I just take offense,” he said, “It’s going to scare the community.”

Speaking as a member of that community and father of an 11-year-old daughter, Gordon Stewart defined as a central question how well the emergency services in Philipstown can protect the public and whether it can be done better.

Dan Valentine, of the Cold Spring Fire Company, acknowledged that “some of the points that came out of the study are very valid.“ However, he suggested that the level of interaction among fire companies had been overlooked and that they often train together to upgrade skills. “Can we improve on them? Certainly. We all work together and we’re going to continue to work together, no matter what happens.”

Pepe said that the controversy itself “has certainly brought us together a lot more.”

Although critical of some of the content of Graner’s report, Hines urged the fire and EMS agencies “to, first of all, read it” and use it as a starting point to review and repudiate as they saw fit. “But do it together. You all live in the same town. You want to protect it together? Then find a way to do it.” Ultimately, he said, it comes down to a basic choice: “Do you want to fix the blame, or fix the problem?”