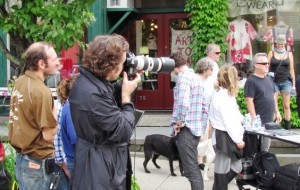 Photo-shoot outside of Art to Wear Too

Cold Spring has always been a popular spot for weekend photographers out to capture a few scenic snapshots that are almost guaranteed to impress the folks back home. Recently though, professionals interested in recording very different kinds of visual images have also become common sights in the village. Cold Spring recently served as a real-life set, playing host to a number of scenes shot for both a feature film and a television “reality series.”
Main Street’s latest claim to visual fame took place on Saturday, June 25 as it provided the backdrop for a fall fashion shoot. Nordstrom* set up shop at the corner of Main and Rock Streets. Bags of autumn leaves were scattered on the sidewalk to add fall flavor to the early summer day. Several models 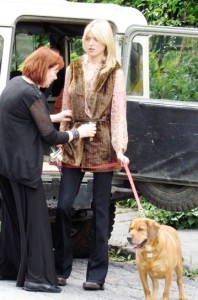 Model's clothes are ajusted, while pooch looks on

waited their turn, attired in a variety of fall fashions that did not look the least bit comfortable on a warm, humid, June afternoon. A photographer clicked away, shouting out instructions to a model across the street, having her alter her pose several times. A large dog that was part of the scene proved uncooperative at times, perhaps due to a lack of professional modeling experience. Behind the photographer, an assistant instantly displayed each photograph on a laptop computer linked directly to the camera. Photos were re-examined for a final time. Another assistant adjusted the model’s clothes. Shots were retaken and retaken again. The dog cooperated. Within a very short time Main Street – and the season – were back to normal.
*Founded as a Seattle shoe store in 1901, Nordstrom, Inc. is a leading fashion specialty retailer, with 215 U.S. stores located in 28 states.
Photos by M. Turton

One thought on “Main Street: Fashion Central for a Day”