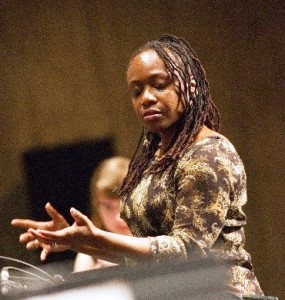 For the second year in a row local violinist Gwen Laster will be conducting a “Summer Strings Workshop” for young musicians of mixed ages and levels of experience.  The one-week full-day workshop will take place from July 11-15 at the Chapel of Our Lady Restoration, where Laster is a board member. The format of the workshop, whose concept was introduced years ago by Laster at the Interlochen Arts Academy, involves beginning the day with a short yoga session for focus, breathing and relaxation (Laster has just become a certified Yoga instructor as well), and then breaking into smaller, skill level-based groups, working on a range of musical pursuits including ensemble playing, composition, theory, songwriting and improvisation. Performance DVDs are watched and all levels, from beginner to advanced, are accommodated. 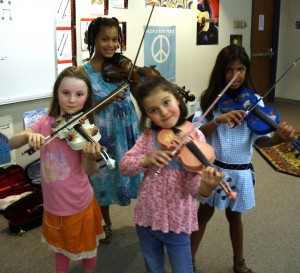 A group of enthusiastic string-players

With a 20-student maximum (as of this writing — about 10 days before the start of the classes — the workshop was about¾ full), and with guidance from Laster and her teaching assistant, a sophomore music major at Hartt Conservatory at the University of Hartford, there will be plenty of opportunities for individual instruction, be it in violin, viola, cello, bass, and electric bass. Some of the workshop attendees have studied with Laster previously, either privately or through the classes she teaches at Poughkeepsie Day School and St. Ann’s (in Brooklyn Heights).  Many will be first-timers. Several will be traveling up by train from the city. One student, who is already in college, will be using the camp to audition for the music department at her school. There are scholarships available for kids in need (Contact Laster for details.) Laster anticipates that most will come with a “set of traditional skills, and we’ll use those but then branch out into different genres: global, improvisational, fiddle tunes, and pop.”
Laster will return to her performing schedule after the workshop, for, as she puts it, “You have to do your own art; if you’re always teaching, you’re never learning.” She’ll be appearing at the Georgia Aquarium Music Series on July 29, and at the Dissident Folk Festival at Brecht Forum in New York City on August 13.  Laster and her husband, bassist Damon Banks, are also working on scoring a feature film.  Even when Laster isn’t working on something specific, she is always “writing little snippets, just to keep it going.  I always need to write.”
Gwen Laster began playing the violin with her high school orchestra in Detroit. Her teacher, Anderson White, introduced her to the combination of electric violin and classical music. After earning her BM and MM from the University of Michigan School of Music, Gwen relocated to New York City. Since then she has carved out a career interspersing composing, performing, recording and teaching. She has released two recordings: Sneak Preview (EP) and I Hear You Smiling of original music.
Her most recent compositions are a global music fusion concept using violin, vocals, electronics, Western and non-Western strings and percussion. Her chamber and orchestral work includes Sphinx Symphony Orchestra, Harlem Symphony Orchestra, Brooklyn Philharmonic, Sugar Hill Classical Band and The Braxton Opera “Shala”. She has toured Japan, Cuba, Haiti, Barbados, Anguilla, Jamaica, Canada, the Dominican Republic and the U.S. and played at President Obama’s inauguration. Laster is also the author or Music for the Creative String Player. The Chapel of Our Lady Restoration is actively seeking to invite and involve young members of the community-at-large to attend events and become vested in this secular, nonprofit, historic space.  To that end, they have recently hosted the Young Artists Showcase (put together by Laster) and have presented children’s programming recently as well. Plans are being hatched right now for a 3-day World Music Festival, which would take place in September, 2012.
The workshop will conclude in a public concert on Friday, July 15, from 5:30 to 7:30 p.m.  The concert is free, though donations are welcomed. The cost of the workshop is $250, and the daily hours are 9:30 a.m. to 4 p.m. To enroll, contact Gwen Laster at 845-265-2878 or [email protected], as soon as possible.
Photos courtesy of Ms. Laster