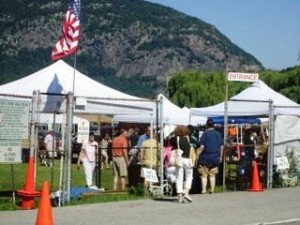 The throngs of people walking purposefully down to Mayor’s Park last Sunday knew just where they were bound: the Cold Spring Antiques and Crafts Show,(CSACS) in its 16th go-round.  On an outdoor event promoter’s dream of a day, sunny and warm, the springtime baseball fields were dotted with white tents and stalls, with 60 vendors set up by 9 a.m., ready to receive the estimated 2,000 to 2,500 anticipated show-goers.

A quick overview walk revealed a great mix of wares and sellers, some who have returned each and every year, others first-timers, a few local to Philipstown, but most from farther afield. Cold Spring’s Dave Cooke, who conceived of the idea and has produced it since its inception, said that, “Vendors love the show.  Ninety percent of them are repeaters.”  Cooke, who owns Sarabeck Antiques, located at the rear of 97 Main Street, started the show for the same reason he still runs it: “to promote business in Cold Spring.  The main reason I do the show here is to help the shops in town. It’s about keeping Cold Spring alive and on the map.” 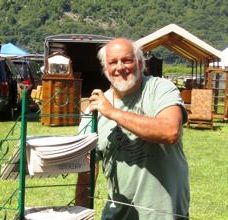 The show itself has morphed over the past few years from strictly antiques to the current mix of antiques and crafts, something that doesn’t always sit that well with the antiques dealers, but which, according to Cooke, is inevitable. “I used to be able to fill the field with just antiques, but no longer, so I had to add crafts. The antiques business has changed dramatically with the economy, and though it’s complicated, when it comes down to it, I have to have vendors.  People are coming in and paying an admission price and there have to be vendors. This year the name of the event was altered to reflect this joint endeavor, with crafts vendors pulled in from the Cold Spring River Festival.

Local Cold Spring dealers Fountain Square Antiques had a good spot right near the entrance.  This was their eighth time at the fair, and owner Jeanine Carmichael-Hill said they found it very worthwhile, not only for the sales made on the spot, but also the ability to refer customers up to their store on Main Street. “If someone’s looking for something particular, I give my mother a call - she’s working in the store - and we try to find it for them.  We send them to look at the other shops in town too.” By 10 a.m. Carmichael-Hill said they had already had visitors from the city, Connecticut, and Rhinebeck perusing their wares.  Those visitors often return to Cold Spring at other times during the year, their first introduction to the area coming from the CSACS, which is widely promoted.  Cooke says most of the advertising focuses on Bergen and Rockland, as well as Westchester, and always Manhattan as well, with the ease of taking a train to Cold Spring and then hopping on the shuttle, which operates between the station and the entrance throughout the day. 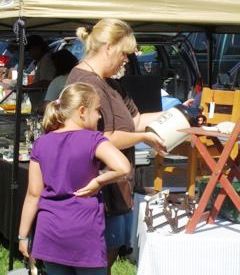 Kathy McGuire checks the price on a jug. Her daughter looks on.

Just further along, a familiar scenario occurred: Woman, holding jug, examining it with determination, “Would you take $30 for it?”  That woman, Kathy McGuire, of Buchanan, was there with her young daughter, Marissa, attending for the first time. “It’s just a nice Sunday and we love to go to things like this - anything we can hit.”  Evidently the answer was yes on the price, as the jug changed ownership.

Deborah Beliveau, of Putnam Valley tested the waters at last year’s show and “had a blast.  I met great people and became friends with another vendor.  Sales were great.”  This is the only show that Beliveau, a painter of colorful canvases, does.  She became familiar with it through years of shopping in Cold Spring.  Young Christian Bach, 13, of Cold Spring, was also a repeat vendor, selling the beaded jewelry he began making three years ago. “I started with simple glass beads.” 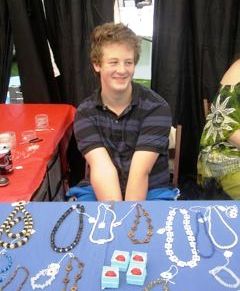 Also at the show for the second time was Hyde Park’s Joe Merante, who had a range of candles and soaps. Recalling a day last year with similar weather “It was gorgeous and we were under a willow.” Merante said he particularly liked this fair because “everyone has space to walk around – the stands aren’t on top of each other.”  Merante said, “everyone knows about this show – I’ve had calls from Poughkeepsie, Peekskill, Pennsylvania even, all asking if we would be at the show, and we had a lady today, she said a friend called her from South Carolina and knew all about it!”  Merante’s patter was working: “You can’t walk away without a smell – long burning times – It’s like biting into an apple,” he said  as a small crowd surrounded his aromatic stall.

There was indeed a mixture of goods for sale, from fine wood furniture to vintage linens, old maps, traditional bric-a-brac tables and all kinds of jewelry.  Hoping to stand out was first time vendor Adelisa Arteaga, of 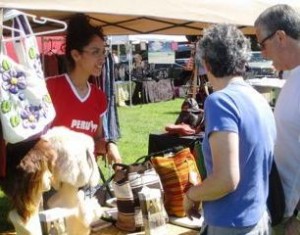 Godettes Peru, who was displaying woven bags and other handmade items imported from Peru.  Arteaga, who started her business just this past October, has participated in shows on Long Island, New Jersey and Connecticut, as well as distributing in Manhattan.  She learned of the CSACS online, and was eager to try it, as she lives nearby in Hopewell.  The day had started out well, with a sale right off the bat.

Dave Cooke said that one of the best aspects of the CSACS was that “people return residually to the Cold Spring shops.  Whether it’s sooner or later, they return.  And the interest in the fair is strong all year; I get calls each month asking: When is the show?”

Visit http://www.coldspringantiqueshow.com/ to keep updated on future events, or call Dave Cooke at 845-265-4414.
Photos by A. Rooney

One thought on “Browser's Paradise”