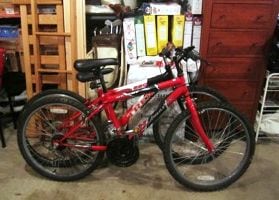 Think of all the garages out there with a grown-out-of bicycle stashed in the corner, waiting for the yard sale that never gets organized.  Or maybe you have a mountain bike with a broken chain, and your urge to ride it has dwindled because you haven’t got round to fixing it. There is hardly a street in Philipstown or anywhere else where one of these scenarios isn’t taking place.

Jay Vitale knows this, and has come up with one of those ‘How come no one has thought of this before?’ ideas about what to do with all of these bikes languishing and waiting for riders.

Vitale, of Garrison, is a cancer survivor.  A regular at Guinan’s, the now-shuttered fixture at Garrison’s Landing, he was friendly with multiple generations of the Guinan family, and was determined to lift the spirits of John Guinan, who was diagnosed with terminal brain cancer at age 52, soon after taking over the business.

Vitale explains the beginning of his idea, “I know, from experience, how people with cancer can fall into a depression.  I invited him to lunch.  John said “I am really pissed that people are throwing repairable bikes out and cluttering landfills.” I told John that we could make a good business model and do something fantastic, but ‘you have to stick around.'”  Unfortunately, that did not occur, but Guinan’s death spurred Vitale on.

Vitale explains further, “I decided to test this model: bikes wanted for disadvantaged children.  Within the first three days I received 11 bikes.  This proved it would work.  With permission from the Guinan family I decided to call it ‘Guinan’s Aurora’ — Aurora being the name of John’s baby grand-daughter. So I decided to search for bikes.  I went to landfills in the area.  Louis Lombardo [of Lombardo Carting] gave me 25 or 30 bikes.  I went to all the bike shops in the area and each of them agreed to help; some gave me bikes on the spot.  Down Bikes in Croton suggested I go to the Croton Police Department.  There they had confiscated about 25 bikes.  They usually auction them off, which takes a lot of staff time.  They referred me to the Croton Town Board, where one lady said ‘Why are we fooling around?’ so now I’ve got all these bikes from Croton and probably 25 or more coming.”

Vitale has been in touch with the Putnam County Sheriff’s Department, seeking to make contact with local police divisions, to get this program up and running in many locations.  He’s also recruiting volunteers, thinking about the project’s suitability for Boy Scouts, other service organizations, inmate programs, and kids who attend BOCES, with the technical skills to help with the repairs.

As word has spread, so have the bike donations: three brand new bikes came from a house on Fishkill Road; still more from a man from Moffat Road who is a representative for a bike company.  Other kinds of donations, just as necessary as the bikes themselves have been forthcoming as well, with Jamie Copeland of the Garrison Volunteer Fire Company seeking to give Vitale a bay at the Upper Station Road firehouse to use as a location for repairing the bikes.

Vitale has a specific goal for all of these bikes, once repaired: giving them to kids.  Kids with cancer and other illnesses top the list, and also kids from disadvantaged backgrounds who are good students. The bikes are distributed “without bias as to race, religion or gender.”

Vitale is passionate about what this simple gift can bring, knowing, specifically, how hospital and medical bills can drain a family’s disposable income: “Children with cancer go right to the head of list.  These bikes can breathe life back into their bodies, and help them with remission.” Vitale has worked with Vassar Brothers Hospital and Goodwill Industries, amongst others, to locate children who fit these parameters; there are many.

What Vitale is most in need of now is a permanent “home” at which to store all of the donated bicycles. He’s presented this plea to the Philipstown Town Board at one of their recent meetings. He explains, “I’m trying to close a perfect circle.  On the one hand I’ve had overwhelming participation, but I need a home. It can be in complete disrepair — I’ll put a new roof on it or anything — but I need a space to do this. This is now a 501c3 nonprofit, I’ve got MJ Guinan and Dan McNally on the board and everything is going great, but I need that home, and I need sponsors too.”

Vitale would be happy to discuss the program, donations of bicycles, and, most of all, suggestions for sponsorship and space with anyone who has ideas.  He can be reached via email at [email protected] or by phone, 845-424-6078.