Nelsonville’s Chris Duffy, a cartoonist, writer and editor who has worked at DC Comics and Nickelodeon Magazine has just embarked on a new venture: a comic strip for all ages which he will create weekly and display in the front window of the Terence Donovan Gallery in Cold Spring. The strip, Wolf X. Wolf, is a comic about an eager young wolf with a penchant for diving into things before he is ready.  An archive will be posted online.In the gallery window, a scannable QR code will allow passersby with smart
phones to immediately access the archive.
Duffy currently edits SpongeBob Comics from his home office in Nelsonville. He has written for comic books such as Batman Chronicles, Superman Adventures, What If?, Rugrats Comic Adventure, and Scooby-Doo. His original characters have appeared in many comics anthologies, including AWESOME and AWESOME 2: AWESOMER (from Top ShelfBooks), and DRAGONS! (from Tugboat Press). 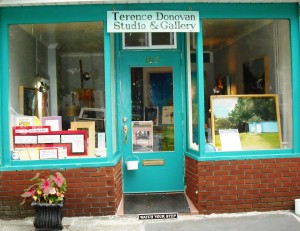 Gallery owner Terence Donovan, (read a recent profile of him here) says, “Chris Duffy’s work possesses an unselfconscious charm, that is both charming and unselfconscious. I thought running his strip in the window would be fun treat for visitors. A weekly public venue is every cartoonist’s dream.” Duffy says, “I’m very grateful to the Donovan gallery.”
Duffy and Donovan have taught together at the Croton-Cortlandt Arts Center.  Duffy has also conducted cartooning classes through the Haldane After School enrichment program. He is currently assisting Donovan with cartooning classes at the gallery. The Terence Donovan Gallery is located at 165 Main St.  in Cold Spring. For more information visit http://terencedonovan.net.
Photo courtesy of Chris Duffy