Panel discusses farming in the Hudson Valley past and present

The fruits of Hudson Valley farming as it exists in this day and age were quite evident in the exquisite-to-the-eye and palate sampling of foods and wines offered in conjunction with a panel discussion of agriculture in this region, past and present, conducted by the Putnam County Historical Society last Saturday, July 30. Produce and wines from purveyors Four Winds Farms and Madura Farms were crafted into delicious appetizers by Fresh Company and Fork and Glass caterers, accompanied by several varieties of Whitecliff Vineyards wines and an array of cheese provided by Hudson Hill’s.   All made for a savory gustatory introduction to the topic du jour.

Moderator Frances F. Dunwell, the Hudson River Estuary Coordinator for the New York State Department of Environmental Conservation, as well as the author of two well-known books about the Hudson River, began by describing the Hudson Valley as “the breadbasket for the whole New York City region a hundred years ago.  The supply of fresh milk, shad, raspberries, strawberries and grains was all traceable to its natural resources: soil, climate, what grows. She introduced each panelist, describing all of them as “having a unique concept behind their agriculture.”

The panelists each weighed in with a description of how they developed a viable agriculturally-based enterprise.  Allan Beals, of Putnam Valley’s Willow Ridge Heritage Turkey Farm, spoke first, detailing the background of his business. “Ninety-nine percent of current turkeys developed from the original heritage turkeys.  The kind in mass production today grow very fast and have to be slaughtered young because in the confined conditions in which they are kept, their cardio-vascular systems can’t grow. The heritage breeds are almost extinct.”  Conditions are different at Willow Ridge, where Beals raises Bourbon Reds, which take about 28 weeks to reach market size. The turkeys stay out on the grass and pasture all day.  Calling it “a real battle to raise them, but I enjoy it,” Beals said, “We don’t realize how industrial agriculture has changed our food supply.” 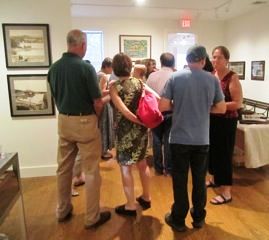 Attendees sampled food and wines before the panel began

Speaking next was Jay Armour of Four Winds Farm, in Gardiner (and a fixture at the Cold Spring Farmers’ Market).  Armour described how he works: “We are certified organic and grow vegetables.  We specialize in heirloom tomatoes, but also a lot of other vegetables, many of which have been hybridized over the years, with their flavor thrown out the window.  We have open-pollinated varieties of vegetables – summer squash, carrots - all with superb flavor; there’s no comparison.  We do not plow or till our fields; we grow in permanent beds, using straw mulch.  This means fewer weeds – it improves the quality of the soil so vegetables actually taste a whole lot better.  Part of the taste is that vegetables are being grown in super healthy soil.”

Yancey Stanforth-Migliore, of Whitecliff Vineyards, provided a vintner’s perspective: “Since we started, my husband and I took it from an open field -it had been a dairy farm – to grapevines; my husband was a chemist.  We’ve developed it from an experimental (400 cases of wine in 1999) to respectable boutique-size, still small (4,500 cases this year – we hope to eventually grow to 6,000 to 7,000 cases per year) in 12 years in the business.  We’re finally building a separate wine-making building, and it’s geo-thermal.  We’ve gone from battling to be taken seriously to making huge strides as a region and as a winery.”

Noting that the first written documentation of the economic advantages of the region was sent in dispatches by Henry Hudson back to Holland, Dunwell cited Hudson as saying it was the richest agricultural area he had ever seen. “He saw an area already in active farming, through the Native Americans. The estuary attracted ocean fish. This then made it attractive for colonial people to settle on the fertile land and productive river.”  Dunwell called the development of the Erie Canal, which opened up other breadbaskets, in Western New York, the “first great agricultural change” in this region, “a cataclysmic shift for Hudson Valley agriculture.  Now there were ways to get cheaper, better goods through to New York City.”  The region responded to this by developing tourism, as “closeness in the city made people flee by coming to the country to get well. This resulted in the building of gigantic Victorian boarding houses, for summer visits.”

Stopping at the “now we’re having another shift” juncture, Dunwell then asked the panelists, “What makes the Hudson Valley a good place for growers?” Beals, in reply, said, “Unfortunately, we’re not competitive on a cost basis, but awareness is increasing that it is a different product.  There’s an appreciation, a level of sophistication here.  I sell out my turkeys -about 250 of them - by the end of September. “Armour was succinct in his answer: “Water.  The northeast has an abundant supply of water.  It’s sometimes too much, but I don’t mind that.  And the markets.  We started our farm in 1988 and the markets were so different then.  New York City was the market.  Now there are so many regional markets which have an educated consumer base which is health conscious and has awareness that local food is healthy.”  Stanforth-Migliore concurred, “Water is a great point to make. Contrast it with California, where they are basically growing wine grapes in the desert. Here there is more disease pressure, rot, fungus, but still. We have good soils, plenty of water, a great market base. New York City still has an assumption that local wines are all made with Concord grapes, which is no longer the case. I’m in a position of advocating for hybrids as a way of improving the grape qualities here. The Hudson Valley was heavily planted in native grapes until Prohibition and there are still many New York wines being made with Concord grapes, but we are putting a lot of research into which hybrids work… Now we’re having much more impact in the city. Our wines are now stocked at Astor Wines, Gotham Wines [two large Manhattan stores] and they serve them at Gramercy Tavern.”

In tackling the question of the future of agriculture in this region, all panelists were optimistic, Dunwell citing the success of Michael Pollan’s Omnivore’s Dilemma as driving the local food movement, and Beals calling farms “the best steward of the lands.  Industrial agriculture compromised our food quality.  It’s not really efficient, there are enormous pollutants that we are bearing the economic weight of. They don’t pay for their own clean-up. They’re not really competing [economically] on an even playing field because of their power.”  Armour sees more small farms as the future of farming in this region. “Rising fuel and energy prices are the future. The cheap food being trucked across the country will get more expensive. The big issue now is land acquisition for young people who want to farm.  About 10 years ago, to be honest, the only people who would work [on the farm] were Mexicans; Americans didn’t want to.  It’s totally changed now, young people want to farm.  I see it everywhere, including at the Northeast Organic Farm Conferences I attend each year: the average age is getting much younger.” Armour amazed the audience, later on, when he provided some statistics on his small farm: “We have a short season, but we grow efficiently. We have only two and a half acres of land.  Last year I grew 38,000 pounds of food on it, using a no till model.  It’s unusual, but possible.” 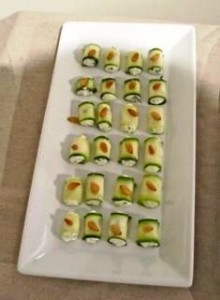 According to Stanforth-Migliore, “What needs to change is mostly at the Federal level.  There is so much political force, especially from the farm states -Iowa and others -to maintain the status quo; they are so powerful.  On a local level we’re blessed around here, there’s so much interest in the quality of what we do. I’d love to see less regulation; there are all sorts of bizarre and hare-brained obstacles, things like strange inter-state shipping restrictions.”

In final comments, Beals (who happens to be running for County Legislator in the November elections) stated that “Once a farm is lost, it very seldom comes back and it’s a real loss to our agrarian past; so much has been removed from our consciousness.”