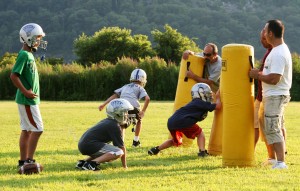 This year they are fielding three tackle teams (Tiny Mite, Mitey Mite and Jr. Pee Wee) and a cheer squad

The Philipstown Hawks opened practice for the 2011 season on Monday Aug. 1st at Mayors Park and are looking forward to another successful season.  This year they are fielding three tackle teams (Tiny Mite, Mitey Mite and Jr. Pee Wee) and a cheer squad.  The Hawks (formerly known as the Packers) have been participating in Pop Warner for over 35 years.  They play in the Mid-Hudson conference, which encompasses teams from White Plains to Kingston. The football teams play at least an eight game schedule starting in early September and continuing through the end of October.  The program is a great learning experience that focuses on the Pop Warner motto of “family, school, football,” which stresses family and scholastics.

Many Philipstown residents (and those that have moved away) have gone through the Hawks program with some of their recent alumni playing Division I college football.  Former player Joe Torchia just signed with the Washington Redskins after a successful career at the University of Virginia.  Matt Giachinta is playing football at the United States Military Prep School in preparation for entering the Academy next season.

Please come support the teams when they have home games at Mayors Park or better yet join up and be part of the team.  They are looking for more boys & girls ages 5 to 11 to come join the fun – its not too late to start. The age/weight matrix can be found at here. You can find the Hawks here or email them at [email protected]
Photos courtesy of Jon Champlin, president of the Philipstown Pop Warner association