Bandstand and Hudson are one

Although the winds from Hurricane Irene largely bypassed Philipstown, the abundant rain caused serious flooding, made people homeless, and produced extensive property damage. Town officials, led by Supervisor Richard Shea, worked from an emergency operations center (EOC) at the North Highlands Fire Company. Shea urged residents to stay home and off the roads as at many locations roads are blocked by either water or debris. Along with Shea, Town Board Members Nancy Montgomery and John Van Tassel, board members, and J. Ralph Falloon, county emergency coordinator for the area and Cold Spring trustee, contended with  among other things  an overturned SUV, at least two dozen locations where roads were impassable, a few conditions with destructive potential, and finding housing for at least a dozen displaced residents, including one who was six days past her due date. The pregnant woman, who together with her husband was forced from their home, was eventually transported to a hospital Rockland County across the Bear Mountain Bridge after firefighters and other officials checked out various routes in their cars. 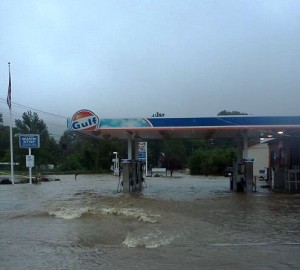 Shea said things were okay until about 10 this morning, when that last band of heavy, heavy rain really pushed things over the brink. CLICK HERE FOR VIDEO. One particularly worrisome condition was a dam at Glynwood Farm, which holds back a lake. Officials had evacuated several families along Route 301 that would be in the path of water if the dam failed. By evening the condition had eased. Several other homes along Route 301 east of Route 9 also flooded from overflowing streams. Throughout the town, brooks, streams and creeks, have topped their banks, flooding homes and blocking roads. 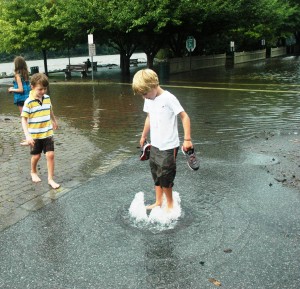 Storm drain turns into fountain at the bandstand during the afternoon

Power was lost throughout much of Philipstown, including parts of Cold Spring and Nelsonville. Philipstown officials said that Central Hudson personnel had informed them that repair crews would not be sent out until the storm had completely passed. By 5 p.m. emergency officials were able to breathe easier as waters began to recede back into their natural flows and electricity began to come back on.  Shea said Central Hudson had told him approximately 1,400 Philipstown residents were without power at the lowest point. The power company had shut down service to many areas when their own substations had flooding difficulty and there were numerous reports of trees on power lines, said Shea.  As evening arrived wind gusts were picking up to their highest level since the storm first began.  A tour of local roads had additional tree limbs and branches falling onto roadway and properties. 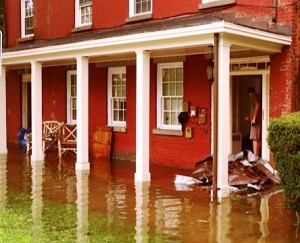 At least a dozen people found temporary shelter at the North Highlands Fire Company firehouse  Company members served them hot food and beverages and provided advice and assistance in arranging alternative housing and eventually driving them to other locations where needed.

Routes 9 and 9D were open by evening in both directions.  However, many other area roads, such as Route 301, east of Route 9, and several dirt roads such as Old Albany Post Road and Indian Brook Road were closed at various points and had suffered extensive washouts. The bridge at Avery Road and Snakehill Road at Avery

At the waterfront in Cold Spring, the Hudson River surged up over the banks and flooded several homes along lower Main Street and the surrounding blocks. The river tide pulled back water somewhat by mid-afternoon, but was expected to come back again at high tide in the evening.  The Cold Spring Fire Company assisted the Water Department with pumping efforts. The West Street pumping station, which controls wastewater to the treatment plant, was experiencing difficulty from flooding. Greg Phillips, water and sewer superintendent, told Philipstown.info that residents should have no concerns regarding the quality of drinking water in the aftermath of the storm.

All four-area volunteer fire companies, including the Garrison and Continental Village companies answered numerous calls for rescues and assistance as well as directing traffic at closed roads and providing open houses for anyone who needed shelter.

Cold Spring Boat Club members reported that their building contained about 18 inches of water Sunday morning and that while things were more or less back to normal in mid-afternoon, they expected another visit from the Hudson at high tide, a few hours after dark. We survived the first round. We thought we were going to get it worse, said Joe Pidala, harbor master. Their dock also had held to that point, anyway — with a little damage here and there, the club members told Philipstown.info. 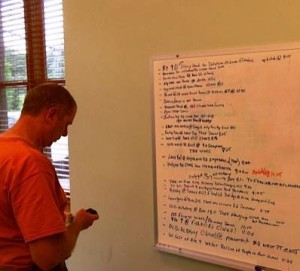 In the aftermath of a big storm last winter town officials had begun to consider the necessity of an emergency response center just for Philipstown. Putnam County does have a Bureau of Emergency Services, but local officials point out it has no physical presence or resources in Philipstown.  Hurricane Irene galvanized the collective thinking, placing Shea, his town board colleagues and Falloon, along with volunteer fire company and ambulance representatives, in a fire company conference room for 12 hours with phone lines and lap top computers.

We learned from the snowstorm and realized Philipstown is always going to have some kind of environmental emergency, so we started this operation, said Falloon, a trustee of Cold Spring and a professional firefighter. Falloon and Montgomery, a certified emergency medical technician, both acknowledged that they don’t have enormous resources at their command for every situation people call with, but they stressed it offered a greater degree of comfort to people to speak with someone who knew their location and their neighbors and could guide other services to resolve the situation from an informed perspective. Things have worked well for our first time, but we’re going to work with the fire companies and others to really assess things, said Falloon.
Additional reporting by Liz Schevtchuk Armstrong and Mike Turton

2 thoughts on “Rain Stops, but Flooding Continues to Wreak Havoc”