It was with great excitement that upwards of 20 Philipstowners, kids and adults —including his family — headed to the Big Apple to view the matinee performance and salute Andrews on his last day.  Everyone enjoyed the show and especially Andrews’ performance, and afterwards he was gracious enough to come out and talk to the kids about various aspects of the production and the profession. 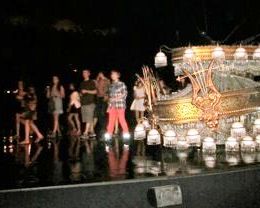 As an extra-special treat, the kids were invited backstage, where they met the leads, got a peek into the dressing rooms and viewed the room where thousands of wigs abide.  They also got to go up onto the Majestic Theater stage themselves, getting a close-up look at the giant chandelier which proves so integral to the production, and, even more thrillingly, the chance to look out into the audience of the 1,607-seat theater and perhaps envision themselves making that jump from the tiny Depot stage to the Great White Way someday. If only making it to the Broadway stage was as easy as it was on Saturday.

In a wonderful twist of fate, thoroughly coincidentally, the role of Andre, which Andrews had been playing (he had played 4 different roles over the 23 years), has now gone to another relative of a “˜Depot Theatre regular’ — actually the same “˜Depot Theatre regular’ as Andrews’ son-in-law (which makes him Jenn Lee’s brother-in-law and Harper and Sasha’s uncle ““ got that?) Aaron Galligan-Stierle landed the part and began his performances last Tuesday, meaning that Galligan-Stierle, who has also attended many a Depot performance, will now be coming up on Sundays, and the question heard backstage may change to: “When is Aaron coming?”

As for George Lee Andrews, a whole new world of roles awaits, and the Depot Theatre regulars look forward to seeing whoever he’ll be next time.