Last month, on one of those blisteringly hot summer days which now seem mirage-like, Audubon in the Parks (AITP), a major state-wide initiative, was launched at Hubbard Lodge, in Fahnestock State Park. This collaboration between Audubon New York (ANY) and the New York State Office of Parks, Recreation and Historic Preservation (OPRHP) seeks to, per their website’s description, “utilize the collective strengths of both OPHRP and ANY to have a greater impact on bird conservation across the state through outreach, interpretation and habitat enhancement efforts.”  The conservation efforts are specifically targeting Bird Conservation Areas (BCAs) and Important Bird Areas (IBAs).  It is the hope of both organizations that by joining forces, in particular during this time of slashes to state and private funding and other difficulties, more can be accomplished together than individually. An offshoot goal is to capitalize on the increasing revenues garnered through “bird watching tourism,” which they have dubbed the “fastest growing form of outdoor recreation in the State.” Audubon in the Parks activities will range from “leading bird walks, and entering data collected as a result, into eBird to track bird usage over time, to more involved efforts such as habitat restoration projects.” 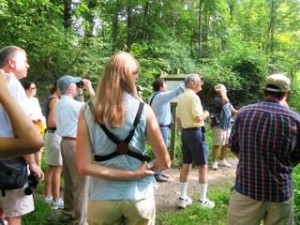 The event began with a bird walk in Fahnestock, which is both a BCA and IBA, conducted by Rich Anderson, Assistant Director of the Constitution Marsh Audubon Center and Sanctuary in Cold Spring.  As Anderson directed participants to use their ears to identify songbirds not visible through the summer’s forest growth, his detailed descriptions of breeding seasons, calls and phrasing of multiple species set the stage for the later description of similarly educational bird walks envisioned by this newly-formed partnerships.  Anderson was accompanied by his summer interns from New York City as well as former Philipstown Garden Club (PGC) Marsh intern Max Garfinkle, now studying environmental science in college, and Haldane 11th-grader Miranda Thompson, this past summer’s PGC Marsh intern.

The bird walk served the goals of the initiative: using educational programs to drive an interest in the ecology of the parks, filtered through the study of birds and their State Parks habitats. Fahnestock was chosen as the site of the roll out of AITP because of the close connections already forged between the Park, Constitution Marsh, and the Hudson Highlands Land Trust. Both Audubon and the Parks Department envision bringing other partners into the cooperative, including garden clubs and scouting organizations.  The goal is to turn recreational bird walks into citizen science activities. 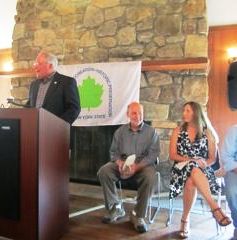 “State Parks is at a juncture where we need all the help we can get,” said Tom O’Rourke, Deputy State Parks Commissioner for Natural Resources. “We need partnerships, i.e. land trusts, which locate places which need to be protected.  They do the legwork, then the Environmental Protection Fund  (EPF) kicks in. Describing ANYs increased awareness of how much work Audubon chapter members do with the Parks to forestall State Park closures and cutbacks, O’Rourke detailed some of the partnering already in place, including leading bird walks, holding meetings, Constitution Marsh working hand in hand with Fahnestock, “We wanted to formalize it,” noted O’Rourke, “Birding is a big business in New York, contributing $1.6 billion annually to the State economy.” 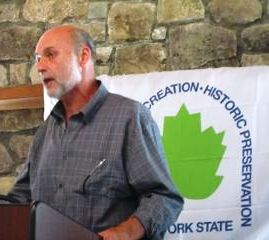 The initiative starts from the ground up, literally, beginning with bird walks – opening them up to the general public, not just Audubon chapter members. There are 22 BCAs in the State of New York – these are modeled after Audubon Conservation areas, and are defined by  larger concentrations of birds, habitats for threatened species, important birds to the State – those found more in New York State than elsewhere.  According to O’Rourke, “We set the land aside as parkland, then partnerships like these get to work.  There are so many threats to this parkland: invasive species.  Right now we are working on a triage basis, deciding where we want to work, targeting specific locations because BCA has identified them as threatened.  This is more than just birds.  People love birds and when you protect habitats you are protecting birds and a myriad of species.  I see the parks as the classrooms.” 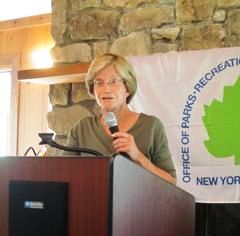 This partnership idea began with Dr. Lucy Rockefeller Waletzky, Chair of the New York State Council of Parks, Recreation and Historic Preservation who exclaimed, “It sure is a happy day for the birds!”  Waletzky spoke of the history of land preservation, beginning with the Pataki era of conservation and bird conservation areas.  She said there was a great deal of work yet to be done, including the management of invasive species removal and then replacement with native species; the blocking of ATV access, and further education and research, including the coordination of trail management during breeding season to accommodate patterns and habitats.  Other activities she saw as crucial were updating the OPHRC Birds of Fahnestock list, inventorying threatened birds, continuing the Christmas Bird Count and developing walks and other educational objectives. She said that the protection of bird life would then spill over as “all the other wildlife that depends on the birds will benefit.â”‘ Bill Bauman, Park Manager at Fahnestock mentioned similar activities and objectives mentioning “It’s great to have friends come and help where we need it.” 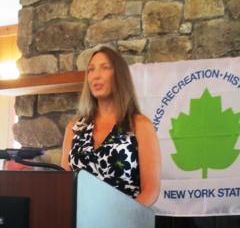 Katrina Shindledecker of HHLT and Friends of Fahnestock.

Katrina Shindledecker, Director of Land Preservation at the Hudson Highlands Land Trust and also President of Friends of Fahnestock Park, told the audience that a recently completed Master Plan has everything in it “from capital improvements to native species management. Partnerships are key.” Rich Anderson of Constitution Marsh told the crowd that, “Though this is a statewide initiative, it really is going to depend on participation and cooperation at a local level.  Philipstown is a fine example of that – of what the conservation community could be like throughout the state: interwoven and inextricable.  OSI [the Open Space Institute] + HHLT + FOF + PGC, we all have similar missions or goals: protecting habitat and connecting people with nature.  The Marsh is part of Hudson Highlands State Park, managed by Audubon.  Jesse Jaycox, the first intern at the Marsh, is now State Biologist.  I spent six years at the Taconic Outdoor Education Center before heading to work at the Marsh.  We all work together in this community to help preservation. This morning the interns and I were up early doing bird surveys. This initiative will make it easier for work to get done.” 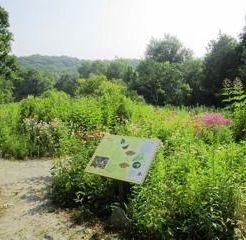 The Ann O'Dell Butterfly Garden, site of the work party

The launch, which featured refreshments provided by the Taconic Center, was followed by a small dose of what the initiative is all about, a work party in the Ann O’Dell Memorial Butterfly Garden, where those connected with the host of organizations now linked together got down and dirty in the trenches, pulling weeds in the heat, and thereby providing more room for wildflowers and with that an improved habitat for the birds and their cohorts in the woods.

For more information on AITP, visit their website.  A link at the bottom of the web-page connects to a calendar of birding activities in New York State.