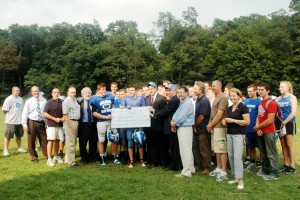 Sen. Greg Ball and Legislator Vincent Tamagna, in new baseball caps, display a copy of the $150,000 check, a New York State grant, with County Executive Paul Eldridge and Haldane Superintendent Mark Villanti on the near left

State Sen. Greg Ball Wednesday, Sept. 14, exchanged $150,000 for a Haldane Blue Devils baseball cap and cited the importance of community involvement in improving Haldane’s athletic fields. The money, a state grant, will go toward that end. Flanked by Haldane Central School District officials, Haldane athletes, and local political leaders gathered on a hot afternoon on the school playing field, Ball ceremoniously presented a large copy of a check. “In tough times people have to realize they have to step up to the plate as a community” on a common cause, said the senator. “We’re going to get this done. This is just the beginning. A lot of great things are going to happen.”
School Superintendent Mark Villanti and Board of Education President Joe Curto both credited District 1 Putnam County Legislator Vincent Tamagna with crucial assistance in obtaining the state grant. “We’re a community that does care,” Tamagna responded. Like Ball, Tamagna was rewarded with a Blue Devils cap. “You are official Blue Devils,” Curto told them. He said the grant represents “step one of a very exciting project.” He subsequently told Philipstown. info that the grant dovetails with the Philipstown-wide effort to survey and find ways to upgrade the athletic fields in the town, whether owned by schools, town, or private institutions. “For the first time we’ve got everybody on the same page,” Curto said.  He added that the field study has been fully funded without the new grant, so “we’re going to leverage the $150,000 into bigger things.”
The bipartisan, school-and-civic gathering for the check presentation included Town Board Member Barbara Scuccimarra, a Republican like Tamagna and Ball; Dave Merandy, school board member and former president, a Democratic candidate for Town Board in the upcoming November election;  J. Ralph Falloon, a trustee on the Cold Spring Village Board, whose members run as neither Republicans or Democrats; and Putnam County Executive Paul Eldridge, as well as Haldane Athletic Director Tom Cunningham and others.
Photo by L.S. Armstrong