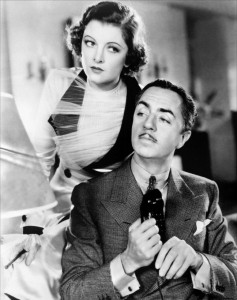 This holiday season, if you’ve ever wished a concierge would take care of your holiday party or had a fleeting desire to shoot the ornaments off your Christmas tree; if you’ve always thought It’s a Wonderful Life could use a smart dose of sarcasm and a little more gin; if you prefer your murder mysteries hot, your holiday films feisty, and your love stories clever but a little bit inebriated; or if you just need a break before Santa lists, sales and in-laws take over your world, then the Cold Spring Film Society has lined up a free event just for you.

This Saturday evening, Dec. 10, the Film Society has teamed up with the Julia L. Butterfield Memorial Library to put on a party and special screening of the most radiantly thrilling holiday film classic you’ve probably never seen: The Thin Man, starring William Powell and Myrna Loy as the sloshy, sassy sleuthing duo Nick and Nora Charles. Set in New York City amid the slew of holiday celebrations between Christmas and New Years Eve, this fun and funny film lands a murder mystery in the playful laps of a brilliant drinker (an ex-detective) and his wealthy, witty, equally intoxicated wife. Amid a mess of martinis and giftwrap the duo manage to dodge bullets and decipher complicated clues whilst hosting the kind of hotel room holiday parties that gilded the lily of Depression-era  Hollywood escapism. The film was a smash hit in 1934, earned four Oscar nominations including Best Picture, spawned five popular sequels and has even inspired a forthcoming remake starring Johnny Depp.

Though The Thin Man offers a cheeky (yet gripping) alternative to the warm and fuzzy morality tales that define the screen during the holidays, it isn’t without a heart. Indeed, the dominant element among the film’s mess of cocktail gowns and cufflinks—Nick and Nora’s entertaining banter—rests on a core of true marital affection that offers a subtle challenge to love’s skeptics and should inspire a thousand date nights.  Or at least inspire a few date nights this Saturday.

So take a moment for yourself before things get frazzled this holiday season, grab a friend, and come enjoy a free night out in our lovely village—with heavy appetizers, wine and a really good movie.

The film will be shown at the Butterfield Library. Food and wine will be served at 7:00pm.  The film starts at 8:00pm and runs approximately 91 minutes. Seating is limited, and the event is totally free, so it is advised to come early.

Up to date info, The Thin Man reviews and more can be found at facebook.com/coldspringfilm or at coldspringfilm.org.