Tuesday night (Dec. 6) members of the Cold Spring Fire Company No. 1 assembled in the company meeting room for their annual meeting and company election. Father Brian McSweeney, of Our Lady of Loretto, led off the meeting with an appeal to St. Florian, patron saint of firefighters, for protection and good fortunes for the year ahead. Following the benediction, the membership of the fire company voted to elect a new slate of officers, (see below), then moved onto its end-of-year business. Near the conclusion of the meeting the company stood to recognize 25-year member, former Chief, President and Board Member (and current Village of Cold Spring Trustee) J. Ralph Falloon. Also recognized were three 50-year life members, Father John Mills, Sam Sunday Jr. and George Baltich. All three were not in attendance, but Chief ChrisTobin, Chief Matt Steltz, President Michael Bowman and Lt. Chris Godsey were able to travel to the home of Father Mills later in the evening to present him with his plaque. 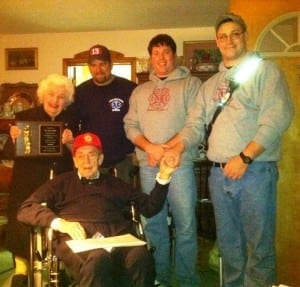 Business then turned to the annual selection and recognition of Firefighter of the Year. This award is given out each year to recognize a firefighter who goes above and beyond on the fire-ground, around the firehouse and who brings honor to the Company. This year’s recipient was Thomas Valentine, who according to Chief Steltz has been an asset to the Company in his duties as driver, as well as always pitching in around the firehouse, organizing events and providing input on many committees. 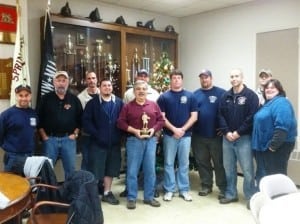 Lastly, the fire company presented outgoing Chief Chris Tobin with a plaque in recognition of his two years serving as chief of the company. Responding to a standing ovation, Chief Tobin credited the professionalism of the Company’s officers with making the past two years successful ones, and pointed to the strong character and leadership skills of incoming Chief Steltz in discussing the bright future of the Company.