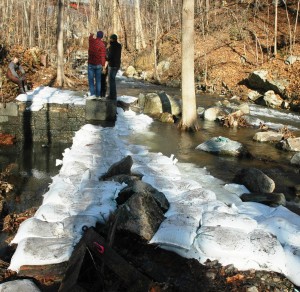 Bag by bag they worked

Math trivia: 60,000 pounds of sand divided by 30 workers equals what? One ton carried by each worker, on average… That equation became a reality on Saturday (Dec. 10) in Cold Spring at the West Point Foundry Preserve (WPFP), where 30 volunteers of all ages and both sexes helped Scenic Hudson staff members corral errant Foundry Brook. During Hurricane Irene in late August, the fast-running mountain stream jumped its bank and spawned two new offshoots, small creeks that surged through the ruins of the 19th-century foundry, an important industrial archeology site. With the water two feet high immediately after Irene and still eight inches deep in places in early December, Scenic Hudson called for reinforcements, literally and figuratively: a barricade of sandbags to confine Foundry Brook to its normal bed and extra hands to help fill the sandbags and move them into place. From Yonkers to the south, Somers to the southeast, and Saugerties and Hudson to the north, the plea drew helpers of both sexes and all ages — grade-school children, young adults, gray-haired older folks. The Philipstown contingent included Town Supervisor Richard Shea, members of Scenic Hudson and Building Bridges, Building Boats, and others fond of the picturesque, 87-acre preserve, a favorite of casual hikers and dog-walkers. 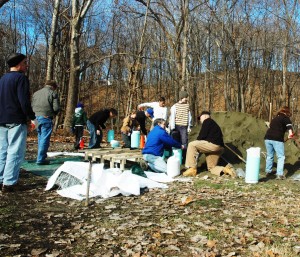 Although the mini-creeks had diminished in the preceding days after initial sandbagging by Scenic Hudson, the urgency remained obvious on Saturday, with boggy “ponds” in the woods and wooden boards forming makeshift bridges over riverlets. “What we’re doing is an emergency fix, so that the archaeological ruins don’t get washed away or disturbed,” Scenic Hudson Parks Director Rita Shaheen told Philipstown.info, before the work began. This coming spring, before development of WPFP into an upgraded historical park begins, Scenic Hudson intends to undertake permanent repairs, but that will require seeking bids and finding a skilled contractor to carry out the work, she said. Shaheen estimated that Hurricane Irene left $300,000 in damages to the foundry preserve, adding that her organization hopes to obtain assistance from FEMA, the Federal Emergency Management Administration, to recoup some of the costs. (Separately, autumn rainstorms took a toll and the October snow knocked down branches and trees, blocking paths not earlier inundated by Irene.)  According to Shaheen, overall the organization’s parks up and down the Hudson River, including the WPFP, suffered upwards of $700,000 in hurricane destruction. At the group’s Mount Beacon site a few miles north of Philipstown, water churned down the mountain and opened a new gully, while at Long Dock in Beacon floods wrecked newly finished berms and landscaping, she said. 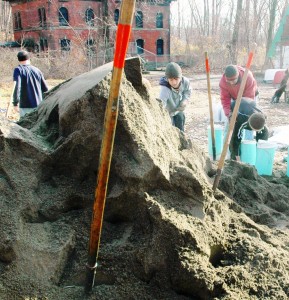 But the hurricane’s havoc at the WPFP was the target on Saturday. Gathered near the 1865 foundry administration headquarters on a bright but brisk winter morning, the volunteers got a brief lesson in sandbag-filling, shovel protocol – never leave the shovel on the ground “blade” side up, as it could get stepped on and swing up and hurt someone – sandbag-tying, wheelbarrowing, and how to heft heavy sacks without harm to either sacks or sacroiliacs. Then the heavy labor got underway, with the volunteers and Scenic Hudson staff teaming up to fill bags with thick brown sand, tie them, and ferry them upstream to a crumbling bank, or a bit further to a spot where one of Foundry Brook’s new offspring poured across an old building foundation.

A few things soon became clear: The sandbags, while looking reasonably small and compact, weighed – well, if not a ton, then a heckuva lot. Maneuvering a sandbag-laden wheelbarrow across narrow boards atop flowing water can be difficult. Tying bags tightly shut with double square knots is easier without gloves, until fingers get so cold they can’t tie at all. And with enough shovels attacking it, a 30-ton sand pile can disappear in less than five hours.

High school student Olivia McKee, daughter of Seth McKee,  Scenic Hudson’s director of land conservation, turned out to help, even though her dad could not be there and she could have spent the day at home in New Paltz, miles away. She said she took part because “I like being outside. I love helping the environment. And it’s a beautiful day.” 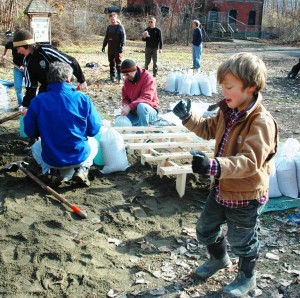 Youngsters shovel while adults, including Supervisor Shea, center, take a turn at bag-tying

Town Supervisor Richard Shea arrived with son Nolan to assist Scenic Hudson and Building Bridges, Building Boats, “two great organizations,” as he put it. “Scenic Hudson gives so much to this community,” Shea said, during a break. “If I can give back, I will.”

Building Bridges, Building Boats uses the WPFP property for various projects and supplied about 10 volunteers, including Dave Hardy, the director. About a week before the Saturday work detail, water running amok from the brook nearly lapped at the overturned prows of boats on racks. Hardy said then that “the flooding was severe for a few days after Irene and had been at least 2 feet high across the concrete slab where the boats are stored. After the water receded, a good number of bricks had been washed onto the slab and a couple of hatches from one of the upside-down boats had wound up in the woods behind the shed,” However, he added, “there was no real damage to the boats.”
Photos by L.S.Armstrong