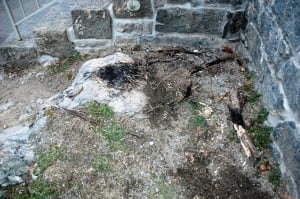 Vandals have again struck the Chapel of Our Lady Restoration, the historic former church on the Cold Spring waterfront, leaving obscene messages scrawled on the front-porch pillars and burning a fire alongside the front stairs and porch.

The damage, discovered Jan. 5 by a member of the Chapel Restoration’s board of directors, apparently occurred either early Thursday morning or at night in the preceding few days. Chapel authorities notified the Cold Spring Police Department, which launched an investigation the same day. The graffiti included a cartoon-like rendering of a certain part of the male anatomy and obscene slurs against a named individual, as well as what looked like a racist epithet. 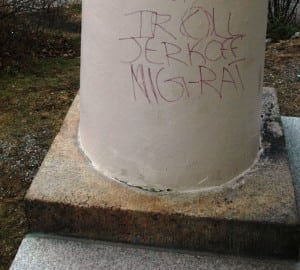 One of the derogatory comments scrawled on the pillar

Set at the corner of the front porch steps and the base of the porch, the fire left a stain about a yard wide. Charred wood remained, as well as sooty smudges against the stone stairs and portico, on Thursday afternoon.

Chapel officials and local police routinely check the site, after the finding in recent months of suspected illegal drug paraphernalia, discarded cans of alcoholic beverages, and fires started near the building. The chapel is owned by a non-profit organization, which opens its doors for free concerts and other events for the community. Dating from 1833, it served the Roman Catholic population of the Cold Spring area before construction of Our Lady of Loretto Church on Fair Street.
Photo by L.S.Armstrong