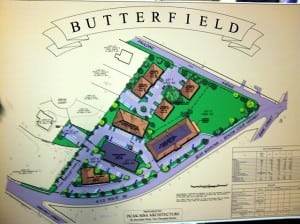 Remains to be seen if solution can be developed

The long-running melodrama entitled ‘whither the Cold Spring post office’ began the new year with a fresh episode wherein the developer of the Butterfield property sweetened his project proposal by offering a 3,000-square foot home for the postal branch currently operating under a short-term lease in Foodtown Plaza. The offer, which seemed to pleasantly surprise the Cold Spring Planning Board, is in sharp contrast to last year’s (and continuing) implied threat by the Foodtown Plaza developer to oust the postal service so the supermarket can expand (as permitted in their lease agreement) unless his plan is approved. The latest Foodtown plan includes creating a new postal space adjacent to the larger supermarket. That intention has drawn the ire of residential neighbors who fear negative impacts on traffic, safety and general quality of life. Whether this newest possibility offers a practical, desirable, achievable solution to the vexing issue will have to await many more episodes involving the Planning Board and the Cold Spring Village Board.

Post office officials had previously rejected Butterfield as an option when developer Paul Guillaro first proposed renovating the old hospital building. They might think differently about a brand new space offering a less cramped site location. Guillaro’s architect even pointed out that his firm has designed hundreds of post offices. Guillaro’s purpose at last Tuesday’s (Jan. 3) Planning Board meeting was to informally provide an advance look at his planned project, which includes residential condominiums and leased commercial space as well as county, town and village governmental operations. Guillaro said he would make a formal application to the Planning Board soon. 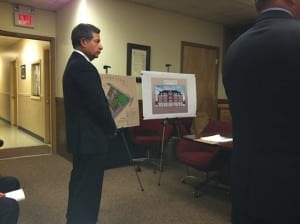 Asked later what impact the Guillaro post office offer could have on the Planning Board’s already-underway review of the Foodtown Plaza plans, Chairman Joseph Barbaro demurred, pointing out the Guillaro proposal was not yet before the board. Nevertheless it was evident from board member facial expressions that some new thinking might be needed all around. Up until Tuesday night the board had appeared favorable toward the Gus Serroukas Foodtown plans with the preservation of the post office a key consideration. Of course the U.S. Postal Service would have to approve any new site location and Guillaro would need a substantial amount of time to construct a new site. Serroukas and Foodtown management have shown little appetite so far for serious accommodation beyond granting short-term lease extensions. But since Foodtown needs a “change of use” approval from the Planning Board for an expansion, perhaps current attitudes can still be modified. The prospect of a viable alternative gave heart to the residential activists who attended the meeting to yet again remind the Planning Board of their objections to the Serroukas plan. 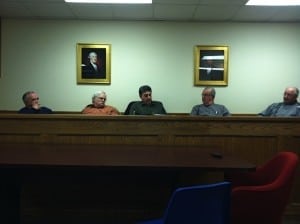 Taxes and other impacts

The post office was not the only aspect of the Butterfield project addressed during the informal discussion. Barbaro pointedly asked Guillaro if his taxes would go up if the project went forward. Guillaro responded that he saw no burden placed on the village budget and further with the residential housing aimed at a 55+ age group there should be no impact on school district taxes either. “You have to come up with the actual numbers,” said member Dick Weissbrod who expressed skepticism about no budgetary or tax impact.

The overall complexity of the project was underscored when Barbaro informed Guillaro that the board intended to retain consultant services in the areas of engineering, planning and legal assistance at the developer’s expense. The project will require many other approvals from county, state and federal agencies and involves a multiplicity of interested parties. On Dec. 13, the Cold Spring Village Board passed a resolution declaring its intent to act as “lead agency” in a coordinated New York State Environmental Quality Review process.

The Planning Board also spent time expressing individual views on the village’s Comprehensive Plan pursuant to a request for comment from the Village Board. The Village Board, which has had a few public hearings on the plan, is likely to approve it at its next meeting. Generally, Planning Board members were highly complementary of the plan and those who have spent considerable time developing it.  Barbaro led the group in congratulating Special Board Chair Michael Armstrong and Vice-Chair Anne Impellizzeri, who were present. 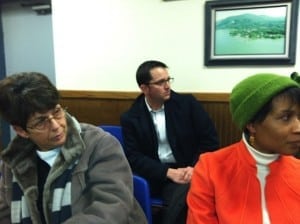 There were, however, some pointed observations. “There are several places in the comp plan where actions need to be taken but it doesn’t say who is going to do it,” said Dick Weissbrod.  He wondered, for instance, who would do the work of actually assessing the true financial impact on the village of major projects, such as Butterfield.

Arne Saari echoed Weissbrod’s concerns, citing a current lack of enforcement of existing village rules such as those on new signage, let alone any that might arise from the Comprehensive Plan. “A lot of laws with no teeth, small villages don’t spend on enforcement,” he said.

Saari also said that “the comp plan strongly mentions preservation of neighborhoods, but it also invites the creation of at-home businesses, B&Bs, and residential office space.  These are not compatible, in my view, with preserving the unique character of our neighborhoods.” Barbaro also voiced concerns about the types of businesses that might someday be permitted in neighborhoods.

Picking up on the neighborhood preservation theme, Janice Hogan and Tom Campanile, opponents of the Foodtown expansion plan, urged Planning Board members to apply the same concerns when visiting their neighborhood on a busy day. “Improving village walkability, sustaining property values, Chestnut Street traffic coordination, these are the same concerns we have as are stated in the comp plan,” said Campanile.  He urged board members to carefully weigh them and work with the residents when considering the Foodtown application.

Citing its domestic U.S. abundance and significantly lower price compared to oil, Saari and Weissbrod said they hoped the village would also look into making natural gas available as an alternative energy source, particularly for new developments such as Butterfield and the Marathon site.  Saari said his research indicated it was physically possible to run pipelines through the village without disrupting existing infrastructure.  He didn’t say who would be responsible for getting such an ambitious project underway.
Photos by K.E.Foley