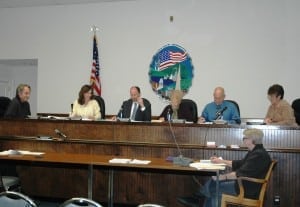 The Philipstown Town Board last Thursday (Jan. 5) launched a busy 2012 agenda encompassing everything from the fundamental – addition of a generator to the Recreation Center – to the far-reaching,   a Hudson River trail stretching from Beacon to Cold Spring and perhaps south into Westchester County. With new member Dave Merandy on the rostrum for his first meeting after election in November, the board also discussed the possibility of new protocols for maintenance of private roads and employee cell-phone usage on the job.

Councilor John Van Tassel kicked off the list of anticipated projects with an update on a generator at the Recreation Center, enabling it to serve as a “welcoming” center during disastrous weather or other times of special need.  To accommodate the generator, which is being donated, he said that he had  undertaken the pre-installation construction, drawing the thanks of Supervisor Richard Shea for literally ”doing the physical labor of digging the trenches, the things people don’t see” when they contemplate a Town Board workday.

Moving to a less-prosaic topic, Shea raised the possibility of town support for a “Hudson River Fjord Trail” along Route 9D. “There seems to be a lot of interest now with the idea of connecting Cold Spring to Beacon with a walking trail,” perhaps extending to Peekskill to the south, he said. Various entities and groups embrace the idea and plan a broad-based meeting in the next few weeks, he added. He remembered previous “talk about this area in the Hudson corridor, the Highlands, becoming a national park.” At present, though, the focus is on the trail, which, according to Shea, might include a trailhead at Dockside Park in Cold Spring, paved pathway, and piers along the route for fishing, as well as offer safer access to the Breakneck hiking area. Currently, with a lack of parking, no sidewalk or path to Breakneck and pedestrians using a narrow, dangerous road or the railroad tracks, “there’s a lot of negatives” associated with 9D, he said.

Like the Walkway over the Hudson in Poughkeepsie, the fjord trail “would bring in thousands and thousands of visitors. It’s the sort of thing that could bring more people to Main Street,” Shea predicted. “There’s all sorts of positives associated with it,” including inter-municipal cooperation and commerce and ways to reach and appreciate the river, he said. From Little Stony Point to Beacon, he pointed out, “there’s no access to the Hudson. We have this beautiful corridor and you’re cut off from it; you just can’t get to the river. You have a scenic byway that you can’t even see. There’s no reason this shouldn’t happen,” he said of the trail. “I’m really thrilled about it and want to get the Town of Philipstown involved. It would be a great thing for the whole town.”

Town Board members discussed tightening the procedures governing development of private roads during property subdivisions, to ensure ongoing road maintenance. Shea proposed that the town insist on “road association agreements. We don’t have any, but we should; that should be a requirement because that’s the root of a lot of these problems.” Anthony D. Merante, chairman of the Philipstown Planning Board, said from the audience that when reviewing development plans, his board typically demands ongoing road care be part of the package.

“It’s something you have to do every time,” with every new applicant, Councilor Nancy Montgomery observed. “It’s not something mandatory in our code.” She agreed to review the matter for the board.

The board also agreed that a policy on cell phone usage on the job by employees might be in order, given questions raised at the Highway Department, especially in regard to drivers of town trucks engaging in cell phone conversations while on the road. “Don’t use your cell phone when you’re driving, it’s a law!” Montgomery said.

“I think a policy should go into effect” for employees, Shea said. “If you’re supposed to be working, don’t be talking on your cell phone.”

Merandy wondered about drivers relying on cell phones in an emergency, but Van Tassel and Shea said radio coverage is available throughout much of the town -– anywhere cell phone coverage is found. They explained that fines for cell-phone driving infractions range from $2,750 to $11,000 for employee and employer, an amount, Shea said, that “we can ill afford.”

‘It’s an employee concern and it’s a safety concern,” Van Tassel added. If carrying on private conversations during the work day, “you’re using town time up” plus creating potential hazards, he said. To cover any union ramifications, the board decided to consult with a labor lawyer and proceed from there.

Board members received a plea in the written report from Highway Superintendent Roger Chirico that residents “whose land brooks flow through to start cleaning fallen trees and debris out, and from along the side of the streams so they flow more freely. This is a major concern as the debris has caused a lot of damage on town roads,” Chirico emphasized.

In response to a question to limits on how extensively private individuals can disturb streams without state permission, Shea said residents could provide minor clean-up and remove dead trees and shrubs from banks before they collapse. “We’re not encouraging residents to go into rushing streams and start dragging things out. That’s a bad idea,” he said.

In his summary for December, Garrison Volunteer Fire Company President Jamie Copeland reported that along with responding to car fires and accidents, alarms, smoke investigation, and similar calls, the department held its annual “Santa run,” delivering socks to the women at the Walter Hoving Home and to the men at St. Christopher’s Inn at Graymoor. “It’s a lot of fun and a tradition,” as well as “a great opportunity for us to get into outfits that sometimes don’t fit very well!” he said.

Board members also saluted the Putnam County Sheriff’s Department for its help in resolving traffic hazards along Route 9 and Winston Lane, at the school bus stop, as well as in regard to other problems. “They’ve really been pro-active,” the supervisor said.

The session began with the board systematically working through a 15-page list of annual pro-forma appointments and actions –- naming of an official bank, legal counsel, independent  auditors, and more, as well of town staff, such as clerks or secretaries and department officers. Although it proceeded with alacrity and little or no discussion on most items, a sticking point arose over designation of a print newspaper to run paid town legal notices, a job for years handled by The Putnam County News & Recorder. Montgomery expressed dissatisfaction with perceived inaccuracies in the PCNR’s news coverage as well as with quotes she said the paper attributed to her without interviewing her, but cited her belief the public can read between the lines and see two sides to controversial issues. She recalled that in 2002 legislation came up in Albany to allow online publications to run the legal notices, but failed.

Shea wondered whether the board had any latitude – and the PCNR was duly appointed again as the designated publication. “The people need to have this information of public notices, and this is our only option,” Montgomery commented after the meeting. She again mentioned the 2002 legislative proposal. “A lot of time has passed,” she said. “We’ve come a long way with technology since then, so maybe it’s time to explore this bill again.”
Photo by L.S.Armstrong