Quick. Name three businesses in Philipstown that also have offices in San Francisco. You may have an extremely difficult time naming numbers two and three – but number one is Tightrope Interactive, now located at 114 Main St. in Cold Spring. “Now” is the operative word. Unbeknownst to the vast majority of local residents, Tightrope has been doing business in Cold Spring for three years, although their walk-in traffic could likely be counted on a thumb. Previously located above Indigo Chic and for a time below Le Bouchon, the company has finally come to rest on the ground floor. For their first few weeks in the space formerly occupied by Jane Krenach Antiques, Tightrope didn’t even have a sign.  Just who were all those people working so intently at computers – and just what were they doing? Passersby were known to open the door, stick their head in and ask, “Hey, what do you guys do here?”  I know, I was one. 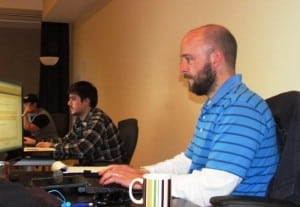 Tightrope Interactive focuses on internet advertising and online marketing. “We specialize in software and education,” said David McCarthy, general manager of the Cold Spring operation. “Basically we do search engine marketing.” How does a company make money via search engines? McCarthy said that Tightrope owns numerous domain names such as “psychologydegree.com.” When someone interested in pursuing a degree in psychology visits that site – and inquires at a university mentioned there as a result, Tightrope Interactive is paid a finder’s fee. Their job is to provide clients such as The University of Phoenix with good quality leads. That partnership is a natural since Phoenix is an online university. In the software field, video games are prime territory for Tightrope.  Playfin.com, another domain name owned by the company, welcomes some two million visitors per month. Gamers go there and are offered free samples – such as an hour’s worth of playing time on a new game. Of course nothing is really free.  If the visitor plays a game on Playfin.com, likes it – and buys it – Tightrope earns yet another finder’s fee. 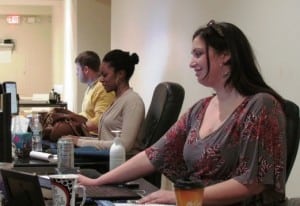 The location has worked out well in other ways. Clients seem to like the Hudson Highlands. “The big client lunch is sort of a dime a dozen now. But when you can take a client kayaking on the Hudson River they’re really impressed – they remember that.” Clients include such household names as Ask.com, TicketMaster and Lending Tree. Major vendors include Yahoo, Facebook  and Google.

The active outdoor perspective is a perk for employees as well – often in the form of staff outings. “We’ve gone rock climbing, kayaking…as a staff ….,” McCarthy said.

Tightrope’s San Francisco office is a much bigger operation with close to 30 employees. “Design and copyright work is done there…but other than that we do everything here that they do in San Francisco,” McCarthy said.
Photos by M.Turton

5 thoughts on “Not So New Business Moves onto Main Street”