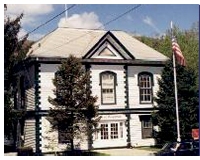 Philipstown’s Town Board Thursday (Feb. 2) took preliminary steps toward emergency-shelter self-reliance, given the likelihood that the Red Cross would not staff a shelter at the town Recreation Center. The board discussed options at its formal monthly meeting, at which it also got updates on crucial road repairs and again talked about the old Butterfield Hospital property, site of a planned inter-governmental facilities building.

Consideration of shelter possibilities came a week after installation of a large, new generator at the Recreation Center, amid expectations that Putnam County and Red Cross would operate a shelter there in emergencies. However, board members explained, during subsequent meetings, it became clear that unless a major emergency occurred only in Philipstown, the county and Red Cross would not run a shelter here but would concentrate on shelters in places with the most population –- elsewhere in the county.

“The odds of them coming here and staffing a shelter are slim to none, unless it’s a local event,” Councilor John Van Tassel said. “We will, over the next few months, be working on a plan to better prepare Philipstown to be self-sufficient, because I think we need to be. I was kind of naïve in thinking that `we have the Recreation Center and now we’re going to have a [Red Cross] shelter.’” As he outlined it, self-sufficiency means both a volunteer-staffed shelter at the Recreation Center and teaching residents to live out most emergencies at home. He said that the Red Cross, while not running the shelter, would provide equipment and guidance and that shelter volunteers would not come from fire departments but from such groups as fire department auxiliaries, churches, and civic organizations.

““We can train our residents as volunteers in shelter operations,” said Councilor Nancy Montgomery, who has been working with Van Tassel on the issue. “We’ll definitely start a campaign for this.” Van Tassel said that current emergency-management thinking is that “the best sheltering is to stay in your own house. So we’re going to encourage people to be prepared” and cope at home “regardless of the temperature.”

Councilor Dave Merandy, elected to the board last November, suggested that Philipstown already has an asset in its spirit of cooperation. In meetings with other towns “one thing that really was obvious is how lucky we are in Cold Spring and Philipstown, because there was friction on all these other boards with their highway departments or whatever and with municipalities locally,” he said. “Whatever you might think about this area, we have it really good, I think,” in regard to town-wide cooperation.

On another emergency-related topic –- the aftermath of Hurricane Irene -– the board got a written update from Highway Superintendent Roger Chirico on repairs. His department “started work on building a temporary road at the Winston Lane culvert site” while likewise preparing to put the culvert work out to bids, Chirico wrote. Damaged in the hurricane, Winston Lane “has a three–ton weight limit, which will not allow emergency vehicle or school bus access,” a situation that “has caused great safety concerns,” including worry about the school-bus stop on Route 9. The temporary road “will give access to both emergency vehicles and the school buses, alleviating those safety concerns,” Chirico stated.

“The whole thrust is to get the school bus back in there so we don’t have unsafe conditions on Route 9,” Supervisor Richard Shea added. At the Dec. 1, board meeting, Winston Lane residents described the traffic hazards facing school children at the Route 9-Winston Lane intersection, and Chirico’s report noted that Garrison Union Free School officials also had expressed concern.

Chirico also informed the board that two private commercial construction firms, Lisikatos and Ciccone, have been stabilizing conditions on Philipse Brook Road and East Mountain Road South along Trout Brook, respectively. Therefore, he cautioned, “East Mountain Road South is closed, except for local residents, one mile north of Trout Brook Road and one mile south of the Dutchess County line, until further notice.” Bills for the Philipse Brook and East Mountain Road South projects will be submitted to the Federal Emergency Management Agency (FEMA) for reimbursement, he wrote.   So far, Shea said, the town government has not received any FEMA funding because repair projects are still underway but that with the applications approved “we know we’re going to get the money.”

Because, as Shea put it, “this thing is moving along pretty rapidly,” the board scheduled a workshop session on Feb. 29 at 7:30 p.m. to review the planned Butterfield Hospital project with the public and the developer, Paul Guillaro. He said that contrary to fears on the part of some residents, the town definitely wants a senior citizen center at the site. “Right now the building is just sitting there, a hulking mess,” he said. “I think there could be some useful activity over there. How that plays out,” as the design and details move through the application process, “I’m not exactly sure.” Along with senior-citizen housing, the mix might include a 24-hour, walk-in urgent-care medical clinic, Shea said.

Van Tassel advised the public to remember that the Village of Cold Spring, not Philipstown, has jurisdiction in the approval process.  “We have no say in that,” he said. Merandy recommended board members and public alike take a look at the proposed location of the intergovernmental center. “I don’t see how it fits into that space,” he said. “And if you could crush it in there, do you want something crushed in like that?”

“There are aesthetic concerns, definitely,” Shea concurred. “You can’t shoe-horn a large building into the side of a hill.”

Building Department fees and Planning Board

With little ado, the five-member Town Board also unanimously approved a new, 25-page roster of town Building Department fees, effective this Monday (Feb. 6). Shea said that in some cases the new charges will be less burdensome for applicants, who can pay them on a staggered basis as they undertake various stages of their projects. “It’s a pay-as-you-go system, and some fees actually did drop,” Shea said.

In other business, the Town Board tapped Mike Leonard to chair the Planning Board on an interim basis. The long-time chairman, Anthony D. “Ande” Merante had submitted his resignation from both the chairmanship and the board itself, due to family demands, but agreed to remain on the board if relieved of the chairman’s duties, Shea said.