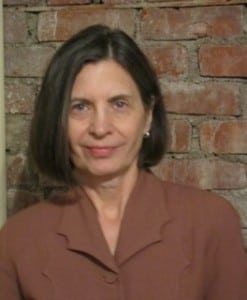 Michelle LeBlanc, on a visit to Philipstown.info (Photo by A.Rooney)

To hear Michelle LeBlanc describe it, there’s no fundamental difference between teaching, her occupation for years, and singing jazz, a second career of sorts, “I see both activities as similar: understanding the human condition. Most of the American Songbook is about human feelings in terms of the heart.” LeBlanc, who will be performing, along with pianist Hiroshi Yamazaki, at the Hudson House in a Valentine’s Day set of dates, was transitioning between teaching and the rest of her life, when singing came about in an unusual fashion.

Having taught secondary school English and then special education, working first at Blythedale Children’s Hospital, and then, for 23 years in the Bedford school district, LeBlanc relieved work’s challenges by delving into differing art forms, introducing herself to various disciplines through the personal experience of them. Starting with Chinese watercolor painting and winding up with beginner’s piano lessons. LeBlanc studied with jazz pianist Charlie Freeman, learning chords, and sometimes singing along with them.  The term ended, and the phone rang and a man said: “Charlie Freeman of The Bearcats gave me your name; he suggested you audition for my quintet.”  The caller, saxophone player Carmen Leggio, completely surprised LeBlanc with the unexpected request but she went with it, and got the job. From that point onwards, LeBlanc says simply, “I became a singer.” Urged on by her husband, a sound engineer, she also became a bandleader of sorts, learning both vocal techniques and aspects of “the business” from the many teachers she has had through the years. She has studied with Marilyn Maye, Mary Cleere Haran and Sheila Jordan, among others, and continues to study, enjoying the process, and is looking forward to starting lessons with Garrison’s Goldee Greene shortly. 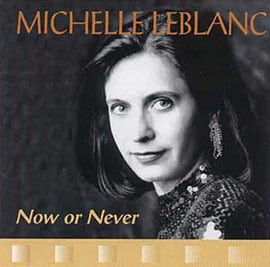 That was several decades ago, and while in the 1980s her singing took place at open mics and was not “a paying job,” as of 1993 she began singing professionally, starting as a jazz duo, with voice and guitar, eventually growing into a trio and then a quintet. Since then LeBlanc’s singing career has been an avocation, somewhere in that fuzzy area between a full-time profession and a part-time hobby. Performing frequently, in varying line-ups and formats, including singing with area big bands, she works frequently with long-time collaborators Bill Crow, on bass, Ed Xiques on horns, and Steve LaMattina on guitar, as well as Yamazaki on piano, covering a swathe of the region, from Westchester to parts of Connecticut, in various combinations. Crow’s career included stretches accompanying pianist Marian McPartland, and Xiques has toured with Liza Minnelli, but all “really love to play on the local scene also — it’s a tradition,” says LeBlanc, adding that “it’s a great, supportive community.”  Locally, she has performed at The Chapel Restoration, Cathryn’s Tuscan Grill, and at the Cold Spring Bandstand. There have been forays into the city in the past, including singing at The Rainbow Room, the Friars Club and at the Mabel Mercer Cabaret Convention but not often nowadays, as “it’s really too much of a project and the competition is really great, with all of the jazz schools producing such wonderful talents now.”

Calling up her background as a teacher, LeBlanc has also put together about 10 different programs which combine song and story: the story behind the development of some aspect of jazz in America whether is it “The Jazz Age” or “1950s Jazz: Bop, Cool, R&B.”  Other programs highlight individuals, be they songwriters (i.e. Cole Porter, her favorite, “just so clever, a poet, funny; the most masterful — he’s on top of my list) or vocalists — she does one on Ella Fitzgerald, one of her two favorite singers, the other being Sarah Vaughan. The “Ella” program is one she especially enjoys performing, because “her story traces the history of jazz: where it came from and how it evolved.”

Other programs take on history through music – in Journey Through the Decades, according to program notes, “explores the influence of the Roaring Twenties, the Great Depression, Jim Crow, the World War II home front, the Blues, the Bebop era and Latin rhythms, as reflected through jazz music.” These programs, which LeBlanc presents at libraries, historical societies, festivals and other public venues, have been funded largely through grants, including many from the New York State Council on the Arts’ Decentralization Program.  LeBlanc thrives on the research (she has a library full of jazz books, including two written by her bass player, Bill Crow, now in his 80s, who “lived through those years, running around with Ray Charles in Seattle…”), involved in putting these programs together. As evidence, she produced a copy of a flow-chart-like diagram she constructed taking “The Blues” from hymns, reels and jigs through ragtime, spirituals, jug bands through to the mainstream era in the 1920s. 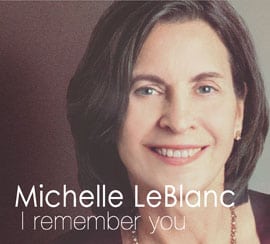 LeBlanc says she has more energy as a singer since she retired from teaching.  “When I was working, I just went out and ‘did it’ and had fun. Whatever I brought to it I brought to it. Since retirement I have the luxury of getting into the songs more and finding more depth; now I have the space to hear what it’s all about. She continues to listen to newer jazz singers as well, naming Diana Krall, Holly Cole, and Catherine Russell as current singers she admires.

Retirement has not given LeBlanc vast amounts of leisure time, however. Her other consuming interest is local politics. A longtime Putnam Valley resident, she is co-chair of the Putnam Valley Democrats Committee. Looking for ways to volunteer the year she retired, LeBlanc went to a meeting and wound up treasurer. The overall mission of the Putnam Valley Democrats is to “preserve the rural quality of the town, as well as the water quality. We encourage people to stay informed, become involved and to vote — it’s a job of educating the public. Campaigning is a bit part of it; it’s all good, part of democracy, reaching out to the other side.” LeBlanc says that Putnam Valley Democrats has a great deal of interaction with Philipstown Democrats and she considers Dottie Gilman, her counterpart there, to be a mentor. Both organizations fall under the overall banner of the Putnam County Democratic Committee.