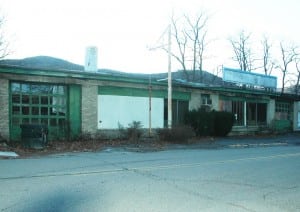 Resolution of issues involving the old Impellittiere Motors in Cold Spring drew slightly nearer last Monday (Feb. 6) when the New York State Department of Environmental Conservation (DEC) proposed to meet with the property owner to devise a plan for remedying alleged violations at the site.

In an offer overseen by Judge Thomas Costello of Cold Spring Justice Court, a DEC officer, Keith Manners, said  his department was willing to give the owner, R.T. Impellittiere, five more weeks to come to DEC offices in New Paltz and work out a scheme with department experts for dealing with old underground gasoline tanks on the property, at 37 Fair St.

Exactly when Impellittiere Motors, a Ford dealership and garage, discontinued business is not clear, though it appears to have been shut by 1997. Although he said little, Impellittiere seemed amenable to the DEC proposal.

In a formal complaint dated Nov. 14, 2011, the DEC alleged that the Impellittiere Motors gasoline tanks were “not closed permanently,” in violation of N.Y. State Codes, Rules, and Regulations provisions governing storage of petroleum.

Separately, the Village of Cold Spring building inspector has alleged that numerous violations of village law continue at the former dealership. Impellittiere had filed a written plea of “not guilty” in response to the DEC complaint and Monday marked his first court appearance. He and Manners met briefly before the session to begin to try reaching an agreement. 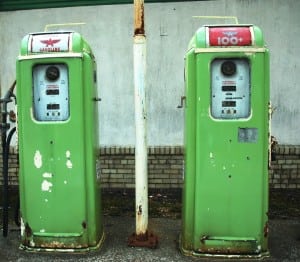 “As of this day, the defendant [Impellittiere] has done nothing” to deal with what the DEC regards as a very real problem, one that constitutes an “unclassified misdemeanor” under criminal law, Manners told the judge, after the public session got underway.

“The tanks are still not closed,” he said. “They’re saying I didn’t do anything at all,” Impellittiere responded. “That’s not totally correct.” He did not elaborate.

Manners said that if Impellittiere takes at least some action to remedy the situation, the department would be willing to downgrade the case to one of civil law. But, Manners added, establishment of a remediation plan “has to be done through the DEC office,” not by Impellittiere on his own.

“As written, this is a serious charge,” Costello advised Impellittiere. He said that the DEC was offering a civil-law compromise and that “you should give it serious weight.” Expressing his own desires “to get this matter moving and hopefully get it resolved,” the judge adjourned the case proceedings until March 14.  “You’re getting a lot of time,” he told Impellittiere.