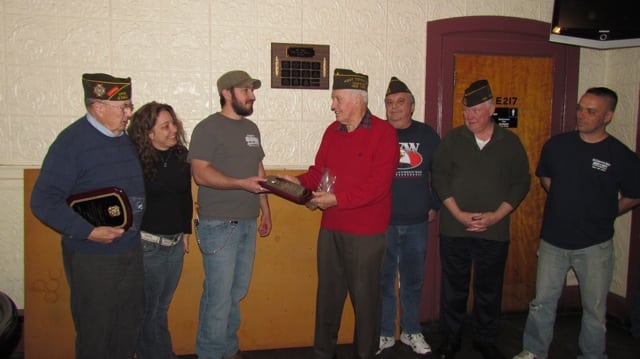 Last week, members of the James Harvey Hustis VFW Post 2362 in Cold Spring said “thank you” to McGuire’s-on-Main, and in particular one of its employees, for their efforts in support of the Wounded Warrior Project.  On Dec. 10, 2011 the popular local pub was packed as it always is for the annual rivalry known as the Army-Navy football game. The afternoon, complete with a hot buffet luncheon, was as boisterous as ever – but this year was different. Tommy Wills, a bartender at McGuire’s and a veteran of the U.S. Navy, had collected and organized dozens of prizes that reflected pride in both branches of the service. Navy won the game, but once the highly successful raffle was complete, the big winner was the Wounded Warrior Project – the recipient of the day’s proceeds. Two beautiful plaques were recently presented to Wills and to McGuire’s-on-Main by local VFW members. Pictured here (L to R) are Terry Lahey (VFW), pub owners Mandy McGuire and Shaun McGuire, VFW Commander Phil Schatzle, Tom Kivel (VFW), Ed Murphy, U.S. Army (Retired) (VFW) and Tommy Wills.  The Wounded Warrior Project has three goals: to raise awareness and enlist the public’s aid for the needs of injured service members; to help injured service members aid and assist each other and to provide unique, direct programs and services to meet the needs of injured service members.
Photo by M.Turton

One thought on “Lending a Hand to Our Wounded Warriors”