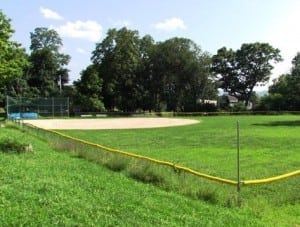 Trustees on the Haldane Board of Education are making good on their intention not to allow a recently completed report on improving athletic fields in Philipstown to gather dust on a shelf. At a special public meeting on Feb. 15 board members made it clear they will move forward on improvements to the softball fields on Route 9D and make badly needed repairs to the school’s tennis courts. The Board also asked Superintendent Mark Villanti to begin discussions with the New York State Department of Education (NYSED) regarding possible funding assistance for development of a much-improved facility on the current site of Haldane’s football field. In what came as a bit of a surprise, Villanti also said that recent discussions have raised the possibility of locating a regulation running track at St. Basil Academy. 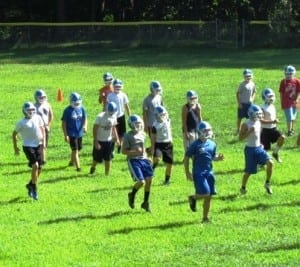 Earlier this year, Ward and Associates, a consulting firm that specializes in athletic field design and improvement, put forward its recommendations [which can be viewed on the Haldane website] for upgrading all sports fields located in Philipstown as part of a study commissioned by Haldane Central School District, Town of Philipstown, Village of Cold Spring and Village of Nelsonville. Separate and distinct from the Ward report, Haldane had previously received a grant of $150,000 through the office of State Sen. Greg Ball for improvements to athletic facilities on campus. Officials at the school district waited until the Ward report was complete before deciding to focus the Ball grant on the 9D ball fields in order to ensure there were no conflicts with the report’s recommendations.

Improvements on 9D will include upgrading the upper playing field and establishing a practice field on the lower level, which can also be used as an interim Little League baseball field. Fencing, dugouts and parking will also be improved. The badly cracked tennis courts will be re-sealed – an interim measure until a plan for what will likely be at least three new courts is determined.

The Ward report recommended that Haldane be the site of the community’s main “game field” and trustees and administration are taking that to heart. Recommendations include significant improvements to the current football field – incorporating either a new turf or synthetic playing surface. Also included is a non-regulation running track which would ring the field and include stations for some field events. Grandstands, press booth and concessions would be moved to the east side of the field. Based on comments to date there seems to be more interest in installing a synthetic playing surface. A major benefit of that would the ability to use the synthetic field on a daily basis, including for physical education classes for primary grade students who currently can’t have classes outdoors. Depending on project details, such an undertaking could cost $2 million and closer to $3 million if night lighting is included. 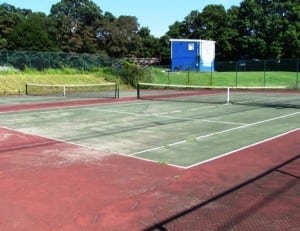 While all trustees expressed support for exploring funding possibilities with the state, Trustee Peter Henderson said that while he supports Villanti’ s fact finding mission and recognizes the sports fields are not adequate, “I have huge concerns around the costs.” He also said he wanted to see budget figures addressing the impact of such a project over a three to five-year period. “I don’t want to [issue a] bond for athletics while cutting academic programs,” he said.

Villanti said that any funding from the state, generally at the 33 percent level for projects of this nature, would have to include improvements to the interior of the schools. When Henderson asked if that meant that a $3 million sports facility project might bring with it $1 million worth of interior improvements, which in essence would be “free” thanks to state funding, Villanti replied, “It’s very possible,” adding that such a scenario had taken place in Chappaqua.

When School Board President Joe Curto said that there may be a need to establish a fundraising group to raise “some real money” from the private sector, Philipstown Town Board member Nancy Montgomery, who was in the audience, questioned that strategy – if it involved creating a new fundraising group. “The Town already has a mechanism set up to do fundraising. Won’t that be spinning our wheels? It could take a year to set up another group,” she said. Curto responded that the Haldane group could be a subsidiary of the existing organization – Friends of Philipstown Recreation.

Trustee Michael Junjulas said that the entire process needs to be thought through thoroughly – including the potential value and uses for the James Pond portion of the campus, east of the school. The school district has contracted Badey and Watson to survey and appraise the roughly 10-acre property. He also said that school district’s funds must stay within the district. “Our hands are tied a lot more than Philipstown’s.”

Montgomery wondered whether the cooperation fostered by participation in the Ward report was being lost. “I’m getting skeptical,” she said. “Can’t all the groups work together – consolidate?” she asked. “The committee (including the Town, both Villages and other stakeholders) will meet on March 7,” Curto said. “Part of moving forward is to continue talking but also look at finances. What we don’t want [re: the Ward report] is to say, ‘This is nice…let’s look at it next year.’ The [full] committee can help keep the vision consistent while moving forward. I’m optimistic. It can happen.” 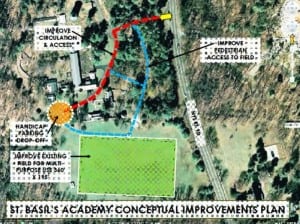 Villanti said he had recently discussed the issue of a regulation running track with officials at St. Basil Academy in Garrison. That site was identified in the Ward report as the best location for such a facility. Villanti said that the area surrounding the soccer field at St Basil had actually been engineered to accommodate a track in the 1980s. “St. Basil has interest in building a track for [use by] the Town and Haldane,” he said. “If their interest wasn’t serious I wouldn’t raise it today.” He also said there would be some “quid pro quo” involved. “[The Town of] Philipstown would have to be part of the discussion. I won’t speak for the Town – there is some possibility [of a track] at Philipstown Park as well.” The Haldane football field site is not large enough to accommodate a regulation track.

2 thoughts on “Haldane Gets Ball Rolling on Sports Fields”