Audience dancing in the aisles

In an experience both exhausting and enthralling, members of the Hudson Highlands Pipe Band traveled to New York City to play alongside the world-famous Chieftains in a St. Patrick’s Day concert that had the audience dancing up the aisles of Carnegie Hall. The evening concert Saturday (March 17) followed on the heels of New York City’s parade honoring all things Irish. Although the band did not march, the pipers and drummers put in a nearly 12-hour day – one well worth it, they agreed afterward.

Led by Mark Civita, band president, and Seth Gallagher, the group’s founder and pipe major,  about 10 band members and accompanying “support staff” – family and friends – gathered at the Cold Spring Metro North platform  to catch the 2:05 p.m. train, following a corned-beef lunch. Clad in their tartan kilts and regalia, they ranged in age from teenagers to middle-aged adults. Saturday’s gig was the second this month for the band and the Chieftains: they had played together in New Jersey a week earlier. But that wasn’t the 120-year-old Carnegie Hall, or the last stop on the Chieftain’s five-week, Voice of Ages 50th Anniversary Tour.

“I’m excited,” announced band member Phelan Maguire, age 13 — “14 in a month. They were my grandpa’s favorite band,” he said of the Chieftains. He waited with his mother, Lorraine, who said that most of their relatives remain in Ireland. She was as delighted as her son at the opportunity. “I’m very boastful,” she said. “I told all the family in Ireland.”

When the train arrived, they bundled aboard, carefully stowing their instruments. “The integrity of the pipes – that’s the No. 1 priority,” Gallagher cautioned as they nestled a set of pipes in the middle of a seat, before Gallagher settled himself in the corner alongside. On the seat behind the pipes, a drum shared space with Philipstown.info’s camera and gear. Civita observed that upon spotting them other passengers had fled after a terse comment: “Ugh: bagpipes. We’re going the other way.” But the pipes made nary a peep on the ride down the Hudson.

Like Phelan Maguire, band member Brian Cole described the chance to play alongside the Chieftains as “absolutely exciting. It’s Carnegie Hall. It’s the Chieftains’ 50th anniversary tour. It’s great!” A nuclear physicist at Columbia University when not playing bagpipes, he made the trip with his daughter, Suzie Cole, who said she’ll be 16 next month. Like her dad, she wore a tartan, but said she played neither pipe nor drums and referred to herself as “just an enthusiast.”

Civita, a police officer who retired from a full-time job but still serves as a part-time officer in Rockland County (as he did about 25 years ago in Cold Spring), noted that the band had been busy in the preceding few weeks, marching in parades in Wappinger’s Falls, Mahopac, and Peekskill, in addition to the concerts. He said the band earns $800 to $1,200 for each parade, but that the Carnegie Hall performance was uncompensated, except for the high honor involved. The parade income helps pay for musical instruments and activities, he said. “These things take time and money.”

As the train chugged toward the city, Civita pointed out that they would gather on stage for a “sound check,” a short rehearsal before the actual concert. “It’s more like working out choreography than anything else,” he explained. 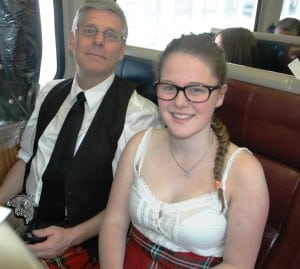 After reuniting with fellow members who had traveled separately, the band – now about 15 strong – prepared for the sound check at Carnegie Hall. Initially the concert hall remained nearly empty, a few musical instruments, including a mandolin hanging from a stand, looking lonely on stage.  Technicians slowly materialized to begin testing equipment and then the Chieftains and other musicians from their tour drifted onstage. They practiced a few numbers before Paddy Moloney, the Chieftain’s guiding force, pronounced everything in order – except for something lacking. “OK – pipers!” he called out. “Highland pipers, please!” The Hudson Highlands Pipe Band came on stage, with another band. “Is everyone ready?” Moloney asked. “Here we go; otherwise we won’t have a rehearsal.”  A trill of drums and flutes started, the pipes added their voices and a vast, uplifting sound filled the ornate hall. Before too long, with everything duly checked and the clock ticking toward the hour the stage lapses into pre-concert darkness, they dispersed again. 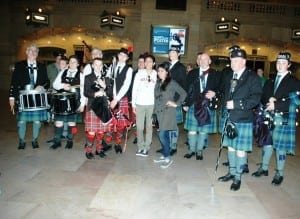 With the performance sold out, every chair from front row to the highest seat in the uppermost balcony appeared to be filled, with many attendees wearing their colors proudly: green neckties and scarves, sparkling sequined “fedoras” in bright green, green beads and wreathes circling heads, even large spherical earrings that flashed bright green, like Gaelic strobe lights.  When the Chieftains and their touring partners filed on stage, loud applause, whistles, and cheers greeted them.

On the train ride down, Gallagher, a skilled musician and instrument maker (as well as Cold Spring’s mayor) had said that Moloney “will be playing my set of pipes.” Moloney opened the concert with his whistle (a small flute), but showed his virtuosity by soon switching to his uilleann pipes, then back to the whistle, as the group segued from one rousing, evocative piece to another. All the musicians – on fiddles, harp, keyboard, mandolin, and more – performed without sheet music, and the printed program provided no play list. Tunes ran from traditional Irish to such musical kin as The Wabash Cannonball and Cotton-Eyed Joe, rendered with a flair part Celtic, part traditional blue-grass, and part modern country-western.

About half way through the concert, Moloney announced another treat: “We have a great pipe band,” or pair, both from Putnam County, “the Stephen Driscoll Memorial Pipe Band and the Hudson Highlands Pipe Band!” After the pipers had lined up behind the rest of the musicians, Moloney began the March to Battle on his whistle and after a few bars the ensemble joined in, followed by the pipers. The audience reacted with its usual foot-tapping (and sometimes, stomping), clapping-along exuberance. After a spirited, loud but melodic several minutes, the pipers disappeared again -– temporarily.

The concert officially “ended” with a noisy standing ovation for the Chieftains and their main ensemble. A youth in the balcony waved an Irish flag. The wearer of the flashing green earrings stepped into the aisle for an improvisational one-woman jig. And bagpipers could be glimpsed, lining the concert hall doors at the back. The night was not quite over. The Chieftains and fellow musicians returned to their instruments, the Hudson Highlands Pipe Band and other pipers and drummers came back on stage, and new reinforcements arrived: Pipers from Brittany, France, accompanied by dancers in Breton dress, marched down the aisles to join the Chieftains and all the rest. A boisterous encore followed. As it continued, at Moloney’s invitation the house lights came up and audience members danced. Some of the onstage performers got into the act, likewise, linking arms and hands with audience members to form a chain that snaked up and down the aisles, dancing, singing and celebrating, while the music poured from the stage and the others in the audience clapped rhythmically. The extended performance finally culminated with the audience-musicians dance chain climbing onstage, chorus line-style, for one last bit of celebration. Participants included an ecstatic-looking Suzie Cole. 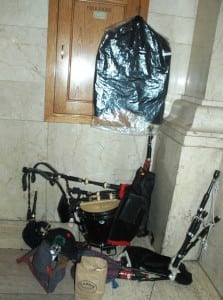 Their weary owners taking a break before the trip home, bagpipes and other gear rest in an alcove at Grand Central Station.

After the concert, the Hudson Highlands Pipe Band members threaded their way back to Grand Central Station through streets still thronged by St. Patrick’s Day party-goers and inebriated revelers. But the band reached the station in ample time to catch the 11:12 train back to Cold Spring. They posed for photos; offered to play in the waiting room, a suggestion a train official vetoed; piled their gear in a corner, eyed the constellations on the gilded ceiling above, and took stock. Asked how they felt now that everything was over, Brian Cole answered. “Great! Exhilarated!”

“Tired!” his daughter said. Their comrades echoed those sentiments.

The train trip north proved uneventful, until riders in the car began peering through the glass into the car ahead. Apparently a brawl had broken out there. Civita, a burly man,  calmly arose and proceeded into the car ahead.   He soon returned from his mission and summed up: Two young drunks had started fighting. He said he essentially told them to “sit down, shut up” and behave. They did. The rest of the ride was quiet and the bagpipers reached Cold Spring around 12:30 a.m., ready for a little rest before their next engagement, a Sunday parade in Wallkill, across the river.
Photo of Hudson Valley Pipe Band courtesy of their website. Other photos by L.S.Armstrong