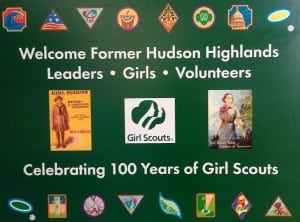 The Hudson Highlands Girl Scouts continued their commemoration of “100 Years of Girl Scouting” at the annual Thinking Day celebration on Saturday, April 14th.  Current and former Girl Scouts and leaders gathered at the Philipstown Recreation Center where each troop was assigned a specific decade to showcase in displays surrounding the perimeter of the gymnasium.  The girls dressed in time-specific fashions, sampled foods that were popular during each decade and presented a “living timeline” during which scouting from each period was described.  There were many original uniforms and artifacts that were displayed courtesy of the Girl Scout Museum.  There was a special ceremony of appreciation and rededication and then the girls learned each decade’s popular dance moves from instructors at the Hudson Valley Dance Studio in Cold Spring.