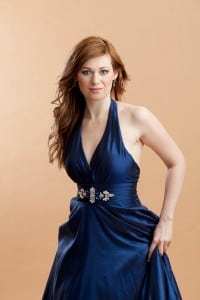 This Sunday, April 29, lyric soprano Gabriela Mikova will perform, along with her friend, harpist Joy Plaisted, at Boscobel, in a recital entitled Sounds of Spring.  The sounds of this spring, and several seasons before, have been sweet and joyous for Mikova, who is from the Czech Republic and now lives in Garrison.  Not many seasons ago, following a concert at Cold Spring’s Chapel Restoration, her then-boyfriend proposed to her there, following a seven-year two-continent romance.  A romance which began on a European tour of the musical West Side Story, a tour which Mikova joined suddenly, after one of the leads broke her ankle.

With its carpets of forests, castles, spires and medieval towns, the Czech Republic has long been associated with fairy tales, and there is indeed a fairy tale quality to Mikova’s life as she relates it — a fairy tale filled with the requisite speed bumps and rewards. Born when her country was under communist rule, she was 10 years old when the government fell.  Knowing early on that she wished a career in opera, at age 14 she entered a six-year program at the Janacek Conservatory in Ostrava.  As she describes it, “Things were changing really slowly.  We were finally getting information from ‘outside,’ but our schools were still in disarray and our singing coaches weren’t great.  I went into the Conservatory with a voice and came out without one in some ways, but I did study voice, piano and theory.”  She performed her senior concert with the Janacek Philharmonic Orchestra conducted by Georg Kughi.

Coming out prepared to teach, as performing opportunities were few, by chance an imitation Mikova did of her mother’s high-pitched speaking voice was overheard by a friend of her singing coach, who just happened to be the head of a light opera company. She was offered the role of squeaky-voiced silent film star Lina Lamont in the stage musical version of Singing In The Rain despite having no theatrical training.  “It was tough, but do-able,” says Mikova, “I had to learn fast, handle the emotional parts of the role, drop my voice, learn how to function in a theater company, all new.”  She wound up gaining much from the experience, “I learned more from two months on stage than six years in school.” 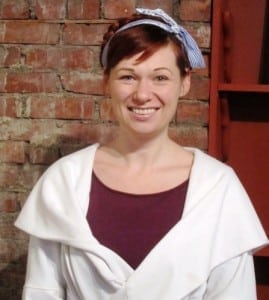 After shifting her focus to also include light opera and musical theater, Mikova then found work in the city of Brno, performing Leonard Bernstein’s Mass with the Brno Philharmonic Orchestra, and then traveling through Spain and Portugal with a production called Golden Broadway, “designed to amuse people during fiestas — we visited villages, all over.  As part of it I had to sing a duet from Phantom of the Opera, which had a very high note, and I was worried about hitting it.  A friend suggested I try a new vocal coach, this Russian singer.  I thought ‘What can I lose?  I can’t sound more horrible than I do now!’” This coach led Mikova back to opera, re-educating her technically.

Mikova was then hired as a soloist by a light opera company, located at the Tyl Theatre in another Czech city, Plzen, “really great — wonderful roles, I liked the city and lived right near the brewery!”  Her roles then provided her with some of the components of her current repertoire, works from Offenbach, (Orpheus in the Underworld) Strauss, and the Czech-born operetta composer Rudolf Friml, including Rose Marie and The Vagabond King. Mikova will be including some of this material in her Boscobel recital on Sunday. Her other repertoire ranges from Verdi, Donizetti and Mozart arias to Baroque pieces by Handel and Scarlatti, and works by her countrymen Dvorak and Janacek.

It was during this time that a break allowed her to accept a job she really didn’t want, performing in a half-European, half-American cast tour of West Side Story.  She had performed as a dancer in another tour of the same show previously and it wasn’t an artistically rewarding experience, as she relates, “As the cast were all northern Europeans we were basically painted orange to resemble Latins.  We were hideous — we looked like dead animals!”  Then came the phone call, a Broadway-esque fairy tale right out of 42nd Street: one of the principals had a broken ankle; here’s a ticket: fly to the Netherlands right away.”  Mikova was not expecting “a whole bus full of Americans [in the cast — hired because audiences in Belgium and Holland were having difficulty understanding the heavily accented Czechs performing in English] … it was not comfortable, I didn’t have enough English, but then I met Steve …” 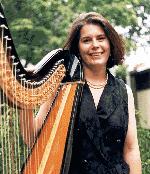 For the next few years, Mikova continued with her engagement with the light opera theater in Plzen, where she had the leads in three or four productions each year, and, under the European system, was paid for a full year but had summers free.  Those summers saw her journeying to the Hudson Valley, where her American boyfriend, Stephen Paul Johnson, was performing each season with the Hudson Valley Shakespeare Festival.  The lead Shakespeare Festival actors are often housed by local supporters, and it was while taking a walk one day, near the grounds of the home Johnson was staying in, that some fairy dust was sprinkled again.  As Mikova tells it, “I’m a big cat lover, and there were none in the home we were staying in.  I was going for a cici (Czech for ‘kittycat’) hunt, looking for them, heading towards the river when I saw a woman in her garden with a little black and white puppy and two gorgeous tom cats.  Stephen was with me and he told the woman that I loved cats, and ‘Can she pet them?’  We started to talk and I discovered she was a harpist and she invited us inside and there were, like five harps there!  She asked me if I knew some Bach and told me ‘You’re a singer — sing something.  I did and her puppy came to me and put his paws in my lap; it was beautiful.  We decided we should do a recital together.  It took us a year, with raising money and rehearsals, but we did it, at the Chapel Restoration, and that’s where we got engaged.  Our friends were there at the concert and they all cheered.”

As icing on the cake, Plaisted, (who has a Masters from Juilliard School of Music, and has performed with the Manhattan Chamber Orchestra and the New York Harp Ensemble, toured the world concertizing, and was formerly the tea-time harpist at the St. Regis Hotel in New York City), had a friend who is not only a priest but a lawyer, who was able to both marry the couple, but also guide them through the green card immigration process with a minimum of stress. And yes, of course, at the wedding, Plaisted played the harp, and Mikova, impromptu, sang.

Mikova says that coming to live in New York and essentially starting over again is not necessarily harder than the career path she was forging before, as “It’s hard in the arts everywhere.  Unless you’re at the very top, it’s basically survival money everywhere.  There I was performing but also teaching voice, traveling back and forth.  As a teenager I wanted to sing at the Met, La Scala.  Now, having done a lot of touring in Europe, I know it’s not so glamorous.  I’m now more modest in my expectations, but, it’s a beautiful, rewarding job when it comes out right.”

To make it ‘come out right’ here, Mikova has had to re-do the technique she learned from her Russian coach, heeding the advice of noted New York coach Gerald Moore, who has worked closely with Renee Fleming and with whom Mikova has been working the past year.  Mikova was introduced to Moore through Philipstown’s Bente Strong. “I was so excited just to meet him,” she says, “I never dreamed he would take the time to listen to my squawking!  He explained the different standards here, and how I need coaching in my French and Italian.  It’s a totally different story in singing here.”  Mikova describes the Russian style as “quite different, if you listen to Russian singers there’s a different sort of breathing; it’s very loud and you can’t do much with the dynamics.”

In addition to a change in technique, Mikova has now had her range assessed as lyric soprano, as compared to her former category of coloratura (slightly higher).  “My coach tells me I should sing the character of my voice,” she says, adding, “It can be hard to find it.  This is the experience of a lot of singers; finding that coach — the right coach — so many of my colleagues are desperate to.  If you find your vocal character, you can stretch yourself later. … With good coaching there are so many opportunities here.”

Mikova and Johnson now live in Garrison year round. She loves it.  “Even with jobs in the city easier to get to, I still want to stay here.  The city is great when you’re in your early twenties, but for me, I grew up on the outskirts of a city in a house with a garden.  My grandmother had a beautiful garden where she grew everything.  We collected berries for preserves.  I love the city too, but if we were living there as actors or singers it would be four walls with a view of garbage cans.  And here we have Shakespeare, Boscobel and the Pig Hill Inn, where I can talk in Czech to Vera, the owner.

In fact Mikova has done a few recitals in the back garden of Pig Hill Inn. Recitals, plus teaching voice (and ballroom dancing, which she learned during her music conservatory training days in the Czech Republic) privately and at the C Note Music School in Cortlandt Manor fill what time she has away from her own studies. This Sunday the ‘back garden’ is the large expanse of the Rose Garden at Boscobel, where she and Plaisted will perform in a program which also includes a tour of the Federalist mansion.

The program will take place at 2 p.m. Advance reservations are strongly suggested. Tickets cost $50 and include the mansion tour and garden recital; they can be ordered online at the Boscobel website.  If there is inclement weather, the recital will be held in the mansion gallery. For more information, visit Boscobel.org or call 845-265-3638.
Photos courtesy of Ms. Mikova and Ms. Plaisted

One thought on “Gabriela Mikova: Singing the ‘Sounds of Spring’ at Boscobel and Beyond”