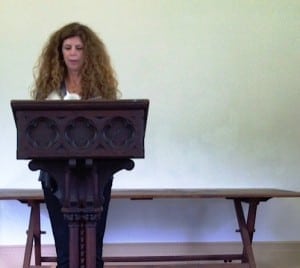 Marie Howe transforms conversations into poetry and poetry into conversations.  Sometimes these conversations take place with other people in common settings–a date or a child on a playground, for example–but always they take place within the speaker, who invites her audience to listen in.  On Sunday afternoon, a comfortable crowd at The Restoration Chapel had the chance to feel part of the ordinary yet extraordinary humanity in the relationships Howe’s poems create.  The occasion was the first event in the fourth season of the Sunset Reading Series.

Howe began with two poems, Marriage and After the Movie, which both considered links between love and fantasies of murder in playful but edgy ways.  From there she interspersed lyrics inspired by her daughter and her mother with poems by other poets: Lucille Clifton and John Rybicki, whose works can be found along with Howe’s on the Poetry Foundation website.  Describing Clifton as a poet “who makes you not ashamed to be human,” and Rybicki as one who finds new ways to see sorrows, Howe used terms that also apply to her work.

Her recognition of poets she admired and learned from proved a fitting complement to the opening reading by Jamie Smith, a former student of Howe’s at Sarah Lawrence, whose selections honored her mentor as they also demonstrated poetry’s healing powers.  These connections encircled the audience for an intimate hour of calm, consistent with series co-founder Rebekah Tighe’s introductory description of the Sunset Readings’ purpose: to celebrate the two-way street between writers and readers.  The next reading in the 2012 season will take place on Sunday, June 10.
Photo by K.E.Foley