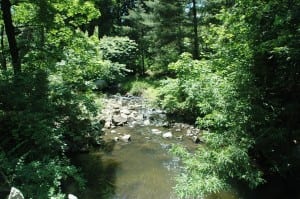 Removal of stones and worries about mallards

Warily watched by neighbors – perhaps including the wildlife – in early June Scenic Hudson began renovation of an old dam in Foundry Brook, removing the upper layers of stone from the structure as well as upgrading the streambed and hauling logs from the banks above. The project was expected to finish about mid-month.

Once crucial to the West Point Foundry, which used water power before shutting more than 100 years ago, the span, known as the Upper Dam,  straddles the brook midway between the Route 9D bridge and Peekskill Road. (It is not the same as the dam located in North Highlands on Cold Spring’s Upper Reservoir, which also served the foundry and now supplies water for Cold Spring and Nelsonville taps.) The dam may date from the foundry’s earliest days. A June 1817 diary of Gouverneur Kemble, who established the foundry, detailed his activities in laying out the site of the ironworks’ buildings and structures and included references to dams.

Scenic Hudson, a regional environmental and historic conservation organization, acquired the property in 1996 and plans to turn the grounds into a historical park, stretching from the Hudson River landward. Marking the upstream boundary of the 87-acre preserve, the Upper Dam lies almost exactly along the dividing line between Cold Spring and Nelsonville. 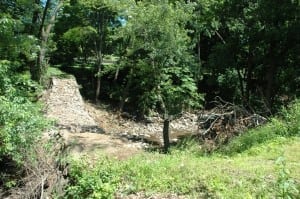 Although the foundry shut in 1911, elements of its hydropower system remained, including a large seasonal pond, just above the dam, which continued to fill and attract birds and other creatures, including ducks — delighting neighbors and those walking along the banks above. Yet over the years, the Upper Dam itself, increasingly swathed in green overgrowth, became all-but-hidden from view. “I guess it does need repairs because the water just shoots out of the middle,” said Lynn Miller, whose house overlooks the stream near the dam.

In a letter mentioned at a Cold Spring Village Board meeting in April, the New York State Department of Environmental Conservation notified village officials of DEC approval for the dam work. Likewise, on June 5, Joe Kiernan, Scenic Hudson’s associate park planner, informed Philipstown.info that “the New York State Historic Preservation Office reviewed the work and found it acceptable as the character of the dam will not be effected.”  However, the arrival of metal-toothed earth-crunching machinery sparked fears among residents of both Cold Spring and Nelsonville that the dam was being demolished. That is not the case, according to Scenic Hudson.

“The dam will only be lowered by a couple feet, not removed altogether,” Kiernan said. “The work is being done to mitigate impacts from large storm events and to improve overall dam safety.” In April, as Scenic Hudson’s plans became public, he told Philipstown.info that “the work is being done to reduce the volume of water impounded by the dam during flood events. The top two rows of stone — plus or minus — will be removed from the dam to accomplish this. The stone will be placed around the downstream base of the dam to act as a ‘splash pad’ to prevent floodwaters from undermining the dam as they spill over its crest.” Kiernan added that “the dam will retain its overall shape and profile; it will just be a bit shorter to lessen the impact of storm events. The stream channel and associated wetlands upstream from the dam will not be affected.” If so, it should be welcome news to the neighboring families –- not counting the mallards. 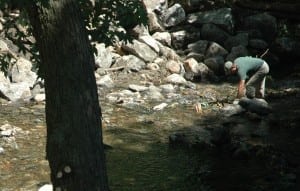 Tony Bardes, with a home adjacent to the dam, cited apparently erroneous claims that the entire structure was being pulled down. “It’s an historic dam” and there seems no good reason to destroy it, he said June 7. He noted that the work crew “took all the big stones off the top” and he worried about possible repercussions. “Hopefully they’re not going to take off any more. I’m thankful they didn’t take the whole thing down.” With some dismay, he also observed that “there was a series of ponds below it that aren’t there anymore.” Nonetheless he added, “when all is said and done, if all they do is what they’re doing so far, it’s OK.” But Scenic Hudson could have made its intentions clearer, he suggested. “What I was upset over was that there was no communication with the neighbors.”

Miller expressed hopes the ducks and other animals at the pond that builds up above the dam would not be threatened. “The wildlife “is really amazing,” she said. Once the dam work is completed, she suggested other improvements might be in order, too. “What I really wish they would do is repair the retaining wall behind my house … which is slowly sliding down into the creek.”