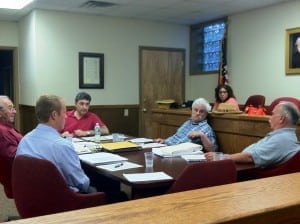 Urges elected trustees not to be threatened by false claims

When the Cold Spring Village Board finally has a new Butterfield proposal before it a number of thorny issues will confront the elected officials as they assume the leadership role in determining the development parameters of the site. A strong taste of those contentious items emerged from the Village Board’s solicitation of the appointed Planning Board’s views on the likely issues that ultimately confront the entire village community as well as the residents of the rest of the town.

The planning board also put a stake in the ground regarding the context for any future consideration of Butterfield development plans. It candidly warned the village board “not to be threatened by false claims of property rights violations for not having permitted Mr. Guillaro to build what he wants.”  And then a little further on in its report conclusion: “The village code, the comprehensive plan and public input are all valuable vehicles for modulating property rights to benefit the community.” The report concludes with, “Let’s keep Cold Spring special.”

The report makes clear that whatever confusion exists over roles and positions taken so far, the Planning Board is not sorry, rather it is proud its deliberations slowed down the developer’s plan so the issues involved can be more fully aired and addressed.  The board also strongly rejects the perception they might have been expressing views on whim or in an unorganized manner. Instead the report argues that board members used the village’s comprehensive plan, the publicly held planning charette and their own experience in examining developer site plans as the basis for positions taken.

The developer Paul Guillaro withdrew his application for developing Butterfield the day after a meeting with the Planning Board, which had taken a 3-2 position against the presence of senior citizen market rate housing on the site. Guillaro claimed he could not move forward profitably without that element of the plan. In its new report the board frames its position as not being against the idea of such housing or against the developer’s need for profit.  Rather the board seeks guarantees against what it believes are avoidable risks in committing to it.

Specifically the Planning Board wants the developer to create fee simple housing wherein ownership is direct (as in single family home ownership) and the tax burden is equal to other village homeowners. Under a condominium plan, which has ownership restrictions, the property tax burden is considerably less. Most members believe this constitutes a subsidy of the site by other village property owners, including senior citizens. The Planning Board also emphasized the need to closely cluster any housing to preserve as much open space on the site as possible. Housing design should also conform to current village look and the height of any buildings should conform to existing standards.

Affordable housing apartments were also in the original proposal and the Planning Board outright rejected this idea as too risky financially. Judith Rose, a local resident and professional in the field, had previously warned the board such housing (which is not subsidized by any government) is experiencing difficulty throughout the state from an inability to meet costs and tax obligations over time, presenting burdens to their localities.  The board took the warning to heart.  It argued that commercial development would be preferable. A belief that such a project would largely result in the “warehousing” of non-resident seniors also made such housing undesirable to pursue.

The Planning Board recommended that the village amend the village zoning code to broaden the possible uses within a B-4 district (Butterfield is B-4) creating more flexibility in a negotiation for a greater mix of commercial retail space and housing options. The board cautioned the village government not to go too far afield in its vision, remembering the impact on the remainder of the village.

A sliver of the Butterfield site would be rezoned R-1, if the Planning Board had its way, to allow for single family homes along Paulding Ave., which would be more in keeping with the general look of existing homes on that thoroughfare.

​​​A traffic study for the entire 9D commercial area corridor, rather than just the Butterfield site was also recommended to assess total impact from adding as many 250 parking spaces on Butterfield. The potential occupation by county, town and village offices as well as police, courts, a post office and other commercial services raises the stakes for traffic consequences according to the Planning Board.

The planning board encouraged the village trustees to pursue a negotiation with Guillaro, referring to him as “an honorable man.“  But it also said, “The Village Board should engage an engineering consultant if it intends to reach a conceptual agreement with the developer so it understands the implications of its decisions.”  Beyond traffic, such infrastructure issues as adequate water pressure for fire protection, storm water runoff and the sewer system need study, according to the planning board.

One thought on “Planning Board Reports Butterfield Recommendations”