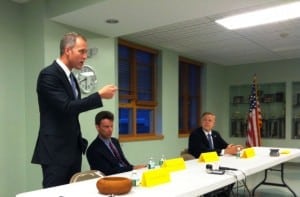 Sean Patrick Maloney, a new Philipstown homeowner, leveraged his superior political strength into an impressive victory in the Democratic congressional primary held yesterday (June 26). According to LoHud.com, Maloney won close to 50 percent of the votes in a five-candidate race.  He now will face one-term incumbent Republican Rep. Nan Hayworth in the November election.

Maloney, a Manhattan-based lawyer with both federal and state government experience, had strong union support, an endorsement from his former boss President Bill Clinton and the most campaign funds.  In the last weeks of the race his campaign mass mailings and phone calls clearly outnumbered rivals.  Locally, the Philipstown Democratic Committee had supported Maloney.

Becker, who had campaigned the longest, starting well before the lines of the 18th district were drawn, had garnered significant support in Westchester and Orange Counties as well as the editorial endorsement of the New York Times. Assemblywoman Sandy Galef was among several regional elected officials who supported Becker.

The total vote in the primary, held for the first time in years in June (as a result of a federal court ruling), was approximately 10 percent of the registered Democratic voters.  Maloney will now have to build a campaign to engage the other 90 percent in what election prognosticators believe will be a close, hard-fought race.