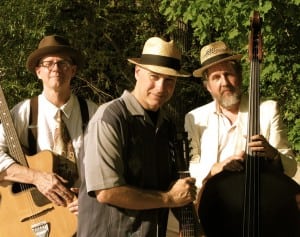 Tiki Daddy is characterized as Hawaiian-inspired music that meets American jazz, reminiscent of the 1920s. “Tiki Daddy plays with a period of time when the Hawaiian invasion was in full force and the sound of the steel guitar mesmerized and hypnotized musicians and record buyers alike,” Harms has said.

This is the fourth year of outdoor concerts presented by Arts on the Lake. Organized by singer/songwriter Kati Mac, the concerts were held at the Kent Town Center last summer while the Art Center was under renovation. This year the concerts return to the north lawn at the Lake Carmel Arts Center, 640 Route 52, in Kent Lakes. If there is rain, the concerts will move indoors at the Center.

Local vendors Carmel Bagel, Johnny Gelato Ice Cream and Johnny’s Fire Dogs will be on site at 6:15 p.m. to offer picnic-type food and beverages to enjoy before or during the concert. To tie in with the musical performances, there will be a Hawaiian theme for Tiki Daddy, soul food for Ada Dyer Sings Aretha Franklin and American fare for Cobert Operations.

Arts on the Lake asks spectators to bring their own folding chairs or blankets for the lawn.

For the opening concert, July 13, the first 30 attendees will receive complementary Hawaiian leis, and Comcast Cable host Jim McGuire will announce the winner of the best (i.e., most outrageous) Hawaiian shirt contest at intermission.

Because of the support of the Friends of the Kent Library, Radovich & Dean Music, Kent Liquors and Joan Iacono Law, the concerts are again free or with a pay-what-you-wish donation at the door. The concerts are also made possible, in part, by the New York State Council on the Arts with the support of Governor Cuomo and the N.Y. State Legislature and with public funds from Putnam County. These grant programs are managed and monitored by the Putnam Arts Council.

More information on the performers and all events at Arts on the Lake is available at artsonthelake.org or 845-228-2685.

One thought on “Tiki Daddy to Open Summer Concert Series”