Battered Bull is one of largest in the U.S. 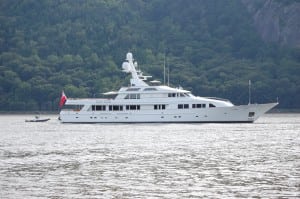 Usually the largest ships spotted off the shores of Philipstown are the rusty tankers and barges that ferry oil and cement up and down the river from Albany to New York Harbor. On July 5, however, a gleaming white 171-foot cruising yacht drifted silently into the waters just beyond the pier in Cold Spring and dropped anchor, and left folks who witnessed the unusual circumstance wondering, aloud, what it was doing here. Was it lost? Was somebody famous on board? Is Philipstown becoming the Gold Coast of the Hudson River Valley?

The name of the vessel, the Battered Bull, was prominently displayed on the ship’s hull, which prompted onlookers to pull our their smartphones and start Googling. The boat is listed in Power and Motoryacht magazine as among the largest 100 yachts in the United States. According to its website, the ship hails from Georgetown in the Cayman Islands and has sailed to over 50 different countries during the last decade. The luxury yacht can accommodate up to 14 guests in seven state rooms as well as quarter a crew of 13. It cruises at a speed of 15 knots.

Members of the Cold Spring Boat Club said that, according to crew members, the Battered Bull had been chartered and that the unidentified proprietors stopped in the area to pick up local residents for dinner. Late in the evening the yacht’s tender could be seen depositing guests back at the dock; the following day it was gone.

Incidentally, the Battered Bull is for sale with Merle Wood & Associates. The asking price is $29,500,000.