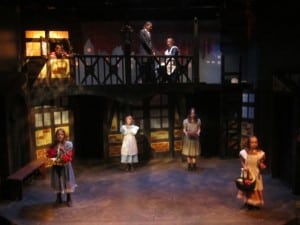 The Oliver cast in rehearsal.

Quick, name a famous musical that starts with the letter “O”: On a Clear Day You Can See Forever, On The Town — the list is surprisingly long. Two of the most prominent and popular arrive this week and next at the Depot Theatre in the form of the Depot Youth Theatre’s productions of Oliver and Oklahoma. In common with their shared first letter, both shows are noted for their strong sense of place, Dickens’ London in the former, and the open plains of the Sooner state in the latter. They’re also known for being perennial vehicles for young performers, the orphans, pickpockets, cowboys and ingénues being well within the range of kids and teenagers.

The younger group tackles Oliver first. Opening this Thursday, July 19, the six-performance production runs through Sunday, July 21. This crew of urchins, wastrels, snitches and a few kindly folk charm, cajole and wend their way through the twists and turns of the saga of young Oliver Twist, the gruel-fed orphan who dares to ask for more and thus propels himself into the requisite back alleys of a Dickens plot.

Young Hudson Lovell plays Oliver. In his song Food, Glorious Food, he runs down a recitation of the meals he dreams of, including “cold jelly and custard.” Asked what his personal food glorious food list would include, Lovell displayed a carnivorous bent: “beef tacos, steak, hamburgers. Oh, and doughnuts.” 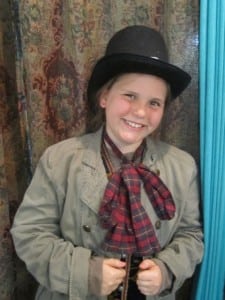 Freya Wood-Gallagher as the Artful Dodger.

Freya Wood-Gallagher is the Artful Dodger, who shows off his/her street smarts and teaches Oliver some tricks of the trade. Pondering the question, “What does the Artful Dodger artfully dodge?” Wood-Gallagher replied, “He kinda like dodges from people. He’s nimble on his feet and he’s seen it all — nothing surprises him. He never gets caught. Oh, except for one scene.”

And then there’s Fagin, in the form of first-time summer Youth Theatre participant Max Mormar, who was quite specific on the best way to go about picking a pocket: “It’s probably best to distract the person. You try to sort of go from the back, especially if there’s a back pocket. That’s where most people keep their wallets.”  And have the techniques changed much through a century and a half or so?

“Actually it’s easier now because these days there are fewer buttoned pockets so it’s not hard.” At this, another actress, Alexa Gagnon, embarks on a story about her grandmother getting her pocket picked on a subway in Paris — petty crime stories being the backstage chatter of this show.

Director Tess Dul is at the helm for her fifth go-round of summer theater. This year is a little bit different, because as a large group of regulars “aged out” last year, this summer brings a large contingent of ​​​first-timers, which makes things both easier and harder. “For the last couple of years the people had been in the program for two or three years before that and understood the acting process and stage directions. This year it has taken more time to teach them the skills of being on stage. But, they’re very receptive to learning, and I’ve learned not to underestimate what their full potential is: I challenge them, and they meet my expectations.” 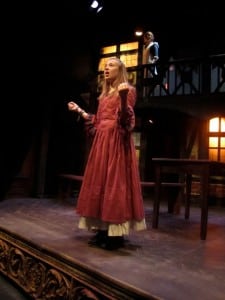 Just one week later, Oklahoma opens for business. When it first opened, in 1943, it proved the harbinger of the modern musical, with songs that moved the plot along and innovative choreography from Agnes DeMille. Though surreys with their fringe on top and beautiful mornings and girls who “cain’t say no” come to mind, there is a darker thread to Oklahoma as well, another element seldom seen before it debuted on Broadway.

Director Katie Bissinger has been “wanting to direct this show with these actors in mind, because I knew that they would appreciate the amazing history and groundbreaking nature of the show, and also because they are always ready for a challenge from me. I have retained plenty of original Agnes DeMille choreography so that they all can experience a little of the same feelings the performers felt back in 1943.

“I am also showing off the musical talents of this cast by having several of them play instruments to kick off the second act. It is such a privilege to be able to pass along my love for a classic Rodgers and Hammerstein show like this, and these actors are doing an incredible job with the piece.”​

For Liz Richter, 18, the lead part of Laurey is “definitely the role I’ve been looking forward to the most” throughout years of performing. Richter, the very essence of a demure yet spunky soprano, first and foremost loves the music. “I get to sing some of my favorite music, including beautiful songs like Out of My Dreams. I always play roles like Laurey, but she has the best music by far of any character I’ve played.”

Melina Marinakis, who alternated the role of Sarah Brown with Richter in Haldane’s recent production of Guys and Dolls, is, at 18, a first-time summer participant. She says she “used to be obsessed with Oklahoma, so I couldn’t not be in it.” She is enjoying playing Ado Annie, a character very different from her own temperament. “She’s kind of quirky and silly, but she’s so out there, and I’m a little more introverted.” Marinakis is “definitely” planning to do more theater in college. 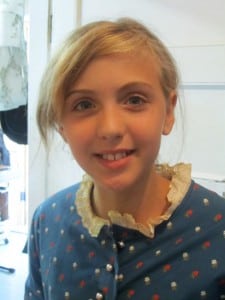 Alex Sharpley at a rehearsal for Oliver.

​For Richter, the summer theater programs at the Depot have helped ​her develop a bond with the other participants. “We’ve become a family,” she says. Marinakis says that “everyone is really close.” These sentiments are echoed by Depot Managing Director Amy Dul: “The Depot has been such a wonderful vehicle for so many kids in our community to find and hone their talents, overcome insecurities and grow into wonderful young adults. From those who want to pursue the performing arts as careers to those who just need a place to fit in and consider themselves one of the family, we have truly grown a family of theater kids. When I watch Hudson Lovell sing, Where is Love? I know that one of the places we all find love and call home is the Depot!”

Tickets for both productions are $12 and are available through brownpapertickets.com. For more information call 845-424-3900 or visit philipstowndepottheatre.org.