Considers himself “one of the last of the old-timers” 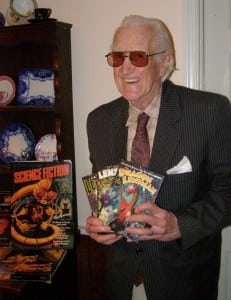 David Kyle’s imagination moves through inventive zones, and out-of-this-world creativity has guided him through life. Long before rocket space travel, Internet communications or galactic gaming, he began crafting his own odyssey. A pioneer in the field of science-fiction publishing, the 93-year-old symbolizes a walking Wikipedia when it comes to fantastic fandom.

After his wife, Ruth, passed away last year, Kyle relocated from his home near the Canadian border to the Hudson Valley to be closer to family. When schedules permit, his daughter drives him from Mohegan Lake to Cold Spring. One of his favorite destinations in town is St. Mary’s Episcopal Church.

“I’ve been coming to the church for about a year and a half,” Kyle said. “Sometimes we go locally [Mohegan Lake], but there’s no comparison to St. Mary’s with the masonry and grounds and the beautiful stained-glass windows.”

Kyle appreciates the history that the church and the community perpetuate. Born in 1919 in Middletown, he grew up in Sullivan County’s Monticello where he discovered science and the fantastic by reading an ​​​​encyclopedia for children.

​“The genesis of my interest in science fiction is because as a very young boy I had a set of The Book of Knowledge,” Kyle said. “I enjoyed the factual matter of astronomy and discovered the imaginative.”

Through the imaginative, Kyle enjoyed the early years of science fiction. He contributed to the genre as a writer, illustrator, publisher and fan.

With his father’s income as a lawyer, Kyle’s family lived comfortably in Monticello during his childhood. When the Depression hit, the family felt the financial sting.

“I had been accepted to Dartmouth [1936], but we didn’t have any money,” Kyle said, “so I went to art school. Also, because my family worked in the newspaper business, it behooved me to write a weekly column, Tomorrow Must Come.” 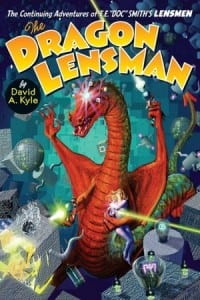 The tomorrows continued to come for Kyle as well. He recalls attending art school on the top floor of the Flatiron Building in Manhattan with clarity.

“I was on the top floor of the Flatiron Building, and my memory of that is that the Hindenburg flew over Manhattan and hours later it went up ​in flames.”

​​​Innovations such as the Hindenburg captured his attention, and Kyle ​continued to read and write about the fantastic. But when World War II came along, he entered the military.

“I went into the Armed Forces a couple of weeks after Pearl Harbor,” Kyle said. “I started as a buck private, and I wanted to be in the Army Air Force. I went to OCS [Officer Candidate School] and became a second lieutenant. I went to England in 1943, came out in ’45 as a captain, and stayed in the reserves and got promoted.” Kyle retired as a lieutenant colonel and still wears a custom-made Air Force ring.

Back home in New York after the war, Kyle utilized the GI Bill to attend Columbia University, where he majored in English. He fostered friendships with other like-minded science-fiction fans, and he and his contemporaries pioneered the publishing of science fiction in hard cover.

Hugo Gernsback, creator of Amazing Stories magazine, advanced the popularity of the genre and coined the term “science fiction” in 1929. For some time, the publishing industry overlooked the genre as an odd form of literature, but early endeavors of pulp-magazine editors, pioneering writers and entrepreneurs moved the genre further into the mainstream. A few years after World War II ended, Kyle and a partner formed Gnome Press.

“A number of people, including me, came back after World War II and started publishing this literature in hard cover,” Kyle said. “I was one of ​the first in Gnome Press. It was perfect that gnomes should become the guardians of the treasures of the world of literature.”

​​​One of those treasures materialized in the form of a book, I, Robot, ​written by Isaac Asimov and published by Gnome in 1950. Kyle remembers the era well, and in those days, most of the writers and readers of science fiction were a tightly knit group.

“I consider myself one of the last of the old-timers,” Kyle said. “There are just a couple of us left. We created the fans, and a fan is a very enthusiastic reader of science fiction, driven to promote the literature and to establish clubs and go to conventions.”

Kyle made conventions a priority. He met his wife at a science-fiction convention, and the couple spent 54 years together before Ruth Kyle passed in 2011. Though he considers himself a science-fiction hybrid of professional and fan, his daughter, Kerry Kyle, thinks of him as an incredibly creative father.

“I love Dad’s illustrations and writing and especially some of his short stories,” Kerry Kyle said. “My favorite is Toys for Debbie, which is about a little girl playing in the backyard and a strange man visits. He gives her a glass globe to play with, but her father puts it away.”

Kyle created a large archive of nonfiction, including a trove of news and sports articles. Science-fiction 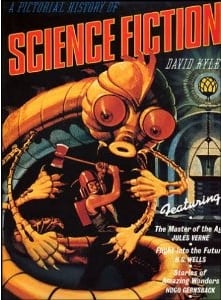 publications include The Illustrated Book of Science Fiction Ideas & Dreams and A Pictorial History of Science Fiction. Though the Kyle family maintains a vast collection of personal ​work, his family is still trying to track down lost treasures.

Kyle is no longer turning out many manuscripts, but he’s still ​​​attending conventions. His daughter will accompany him to SFContario, a ​science-fiction convention in Canada, in 2013 as Kyle has been invited as “fan guest of honor.”

“When you live long enough,” Kyle said, “you get involved with everything. I’m lucky enough, and here I am.”

Kyle continues to track down copies of his illustrations and writing. Contact the science-fiction pioneer at dkylearchives [at] gmail.com regarding old articles and manuscripts.