Local museums across the country tell their community’s stories through collections of carefully preserved, meticulously organized artifacts — historic objects that are catalogued, stored in climate-controlled rooms and periodically brought out for public viewing in roped-off areas and glass cases.

But every community also has a completely unorganized “collection”: a myriad of old objects that have never made it to a museum — artifacts that also tell us about our community, what it looked like years ago and how people used to live. These unsung objects often lie hidden at the back of a garage, tucked away in a workshop or forgotten in some dusty attic. 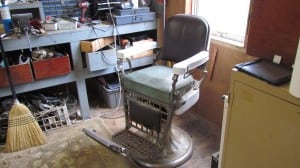 The Emil J. Paidar Co. of Chicago made barber's chairs for shops across the US, including the three used for decades at 86 Main St. in Cold Spring. (Photo by Michael Turton.)

An extremely heavy, old chair now sits in Neal Tomann’s workshop in Nelsonville. For at least seven decades it was one of three such chairs in Sam Sunday’s Barbershop at 86 Main St., Cold Spring, which today is home to the Gift Hut.

Barbershops across America were often unofficial though nonethelesss important community gathering places. The shop at 86 Main St. was no exception. Sunday first worked there in 1928, helping his predecessor in the same business — his father. A Nov. 1, 1981 New York Times article about Cold Spring described that 1928 shop this way: “There was a bathtub in back then, [Sunday] said, and families who lived in cold-water flats over the stores would come in once a week and pay 25 cents apiece for a hot bath. Today, [Sunday] still has the shop’s three original barber chairs, but works alone.” The shop didn’t close until sometime in the mid-1980s.

After Sunday’s shop closed, the three chairs found their way to the Capuchin Franciscan Friars’ monastery in Garrison, site of that order’s minor seminary, also known as  Glenclyffe High School. There, the chairs provided students and friars with comfortable seating in the institution’s barber shop.

After the facility closed the ​​​property was sold to the Open Space Institute in 2001. When the ​friars left Glenclyffe, now site of the Garrison Institute and Philipstown’s Claudio Marzollo Community Center, they took one of the chairs to their retreat house in New York City across from Madison Square Garden. Another was acquired by the late Joe ​Frisenda of Philipstown. The third ultimately landed in Tomann’s ​​workshop.

​​Long-time residents have vivid memories of sitting in Sam Sunday’s barber chairs. By all accounts Sunday was a bit rough around the edges and was seldom, if ever, seen without a cigar in his mouth. Playboy magazine was no stranger to the shop, tucked discreetly inside the newspaper of the day.

“It’s where you went if you wanted information,” recalls local resident Ronnie Mazzuca. It was also a hub of political activity. The 1981 New York Times article said it was a “gathering place for longtime residents. At 3 p.m. every day the mayor [then Cold Spring Mayor Ron McConville] leaves his office across the street and goes to the [barber] shop for what he calls a ‘meeting of the board.”’ A quorum was probably not required.

The Lahey family, long-time Cold Spring residents, has at least three generations’ worth of stories about Sam Sunday’s. Eighty-two-year-old Terry Lahey got his first haircut there, and years later learned something about his dad, Joseph Lahey, from Sunday himself. “Sam told me that when the A&P store [located on Main Street] caught fire in 1949, people were afraid that all of Main Street might go,” Lahey said. “My dad walked into the barbershop, picked up one of the chairs and put it outside. The next day he went back — and he couldn’t even lift it.” 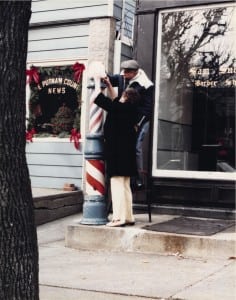 Sam Sunday and his wife Mary outside his barber shop in the mid-1970s. (Photo courtesy of Phil Etta.)

Kevin Lahey, owner of The Main Course, remembers Sunday’s well. “There was only one haircut — a buzz cut,” he said with a laugh. He recalls cigar smoke and how the absence of it occasionally got him in trouble with his dad, Terry. “My dad insisted we go to Sam’s. But once in a while we’d get bored and go to Gus’s Barbershop across the street.” The younger Lahey said that when he returned home with a new haircut, minus Sam’s trademark aroma of cigar smoke, his dad knew he had not gone to Sunday’s — and he was not happy.

Kevin’s younger brother Matt has a more pleasant memory of Sunday’s as a very young boy. “I found a $50 bill in a snowbank right in front of the barbershop on my way to get a haircut, and my dad let me keep it.”

Neal Tomann also got his hair cut at Sam Sunday’s many times and must have sat in the chair that now rests in his workshop. “I was one of eight kids who got dragged in there. There wasn’t any kind of style. You just got your hair cut,” he said. They say that the sense of smell triggers the most vivid memories and like Kevin Lahey, he remembers the fragrances. “No one in our house smoked. At Sunday’s you smelled cigars and cigarettes — all kinds of pungent ​​​smells that you didn’t know as a kid.” Tomann continued to get his hair cut there until into his teens. “Then everyone grew their hair long,” he recalled.
​​
But the real star of this story is the chair itself, built by the Emil J. Paidar Company of Chicago. For many decades that company sold ​chairs​ ​to the more than 100,000 barbershops across the U.S. — until ​the late 1950s, when a Japanese company broke its stranglehold on the market. 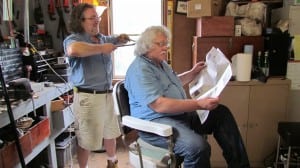 The author reads The Paper and enjoys the comfort of Sam Sunday's barber chair, while Neal Tomann gives him a trim. (Photo by Donna Durr.)

As Terry Lahey’s dad learned, barber chairs are heavyweights all the way. Tomann estimates his weighs more than 300 pounds. It took a concerted effort by him and this writer to move it just a few feet. The arm rests are made of porcelain. The heavy frame is nickel-plated. It is as solid as the Rock of Gibraltar. A pneumatic pump allows the chair to be raised or lowered easily to just the right height. It tilts back, and to this day is an extremely comfortable chair to sit in, perfect for a workshop that has occasionally been known to have a cold beer stored in the fridge.

As I sat in Sam Sunday’s barber chair, with Tomann standing behind me, a pair of heavy metal shears in his hands as he contemplated the merits of giving me a trim, I asked him how he felt about the chair and its story, so many years after he had sat in it as a young boy. “I think it’s pretty funny that the story involves the two guys in Philipstown who are most in need of a haircut,” he said. Sam Sunday would undoubtedly agree.